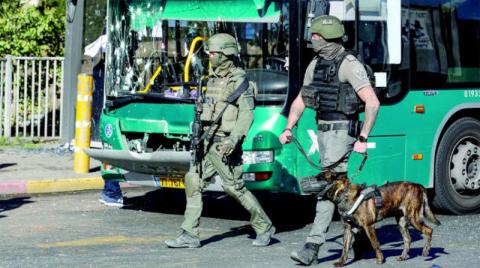 While Israel expanded, yesterday, the process of hunting down the perpetrators of the double attack that targeted two bus stations in Jerusalem, on Wednesday, and resulted in the death of an Israeli and the injury of others, media reported that the police suspected a cell of being behind the attack.

Israeli media said that the security establishment “is on high alert, and continues to hunt down the perpetrators of the two explosions, which were not claimed by any party, and reinforced fears of entering a new escalation phase.”

The head of the Operations Division of the Israeli police, Sigal Bar-Zvi, said that the police “suspected the presence of an organized cell behind the two attacks, not one person, as they were carried out using two almost identical bombs that exploded within half an hour at two bus stations.”

Israel believes that the perpetrators of the two attacks hail from Jerusalem itself and can move easily, but it is looking at a possible role for Hamas in Gaza. A security official said, “If it turns out that the attack came at the behest of Gaza, the price for that will be heavy.”

Maariv newspaper wrote, “There is no information linking (Hamas) to the Jerusalem operation, but in previous cases orders were issued from the Strip, or indirectly through the (Hamas) headquarters in Turkey.”

The Jerusalem attack came in light of Israeli warnings that the region is “on the threshold of a new phase of escalation.” It is noteworthy that the last similar bombing in Israel was recorded in 2016. An Israeli security official told “Channel 14” television: “It seems that the Jerusalem attack will not be the last, and it is likely that there will be larger attacks in light of the availability of motives and capabilities.”