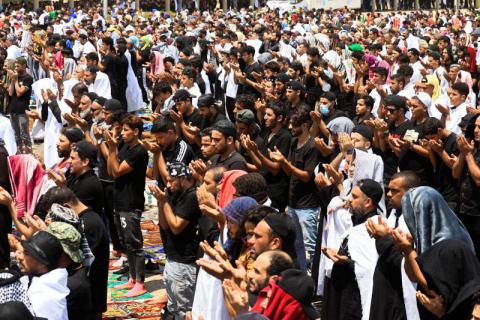 The square of major celebrations was crowded with followers of Shiite leader Muqtada al-Sadr, today, Friday, to perform the unified Friday prayers inside the government’s Green Zone in the Iraqi capital.
Participants in the prayer, by phone, with the German News Agency, stated that the grand celebrations square was crowded with thousands of Al-Sadr’s followers before performing the unified prayer, and that there are other large numbers who will perform the prayer from inside the Iraqi parliament building.
The participants explained that the Iraqi security forces are facilitating the movement and access of worshipers, despite the high temperature recorded by Baghdad today and 8 other provinces.
This prayer is the second of its kind that al-Sadr has called for since mid-July.
The Iraqi authorities and Muqtada al-Sadr’s “Peace Brigades” took strict security measures and carried out the widest campaign to clean the square and prepare it for the unified prayer.
Strict security measures were also taken in all streets and squares leading to the government’s green zone, and a number of bridges were closed to vehicle traffic to facilitate the arrival of worshipers.
Al-Sadr called on his followers to abide by the instructions of the security services, not to spread in the streets of the government’s Green Zone, and to limit the movement of worshipers inside the square, and then leave the place.
Al-Sadr also called on his supporters in the governorates of Najaf, Karbala, Babil and Wasit, in addition to Baghdad, to participate in the unified prayer.
The establishment of the unified Friday prayer in Baghdad coincides with the protest movement of the followers of Shiite cleric Muqtada al-Sadr entering its seventh day inside the Iraqi parliament building to demand the dissolution of the Iraqi parliament, early elections, retribution for the corrupt, and rejection of Muhammad Shia’s nomination to form the new Iraqi government.
It is expected that the representative of the Secretary-General of the United Nations in Iraq, Jeanine Hennis-Plasschaert, will hold separate meetings later today, Friday, with the highest Shiite authority in Iraq, Ali al-Sistani, and the leader of the Sadrist movement, Muqtada al-Sadr, to reach common points to bridge the gap between views on the political crisis in which it is experiencing. The country, in light of positive signs from the forces of the “Shiite Coordination Framework”, of the possibility of holding early parliamentary elections in Iraq, if a consensus is obtained from the political forces.