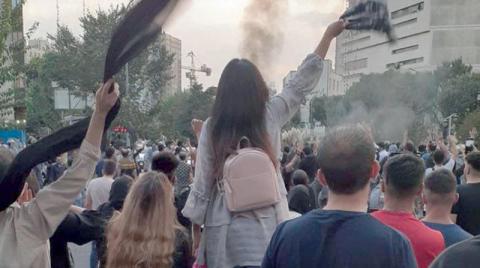 Protests expanded in Iran, and spread to about 100 cities, yesterday, on the fifth day of their eruption, following the death of the young woman, Mahsa Amini, while she was detained by the “morality police.” A human rights organization said that 31 people were killed by security forces’ fire, and demonstrators burned cars and police stations, at a time when the “Revolutionary Guard” warned of the expansion of protests.

Protests renewed in Tehran and several cities, yesterday evening, after violent skirmishes between security forces and protesters. Protesters set fire to at least two police headquarters in Mashhad and Tehran, in addition to dozens of vehicles. The Iranian Ministry of Health stated that 61 ambulances were “sabotaged” by protesters, while a video recording showed protesters being rescued from security forces’ chains while they were being held in an ambulance.

The protesters expressed their anger at Supreme Leader Ali Khamenei. A crowd was seen chanting in Tehran: “Mojtaba, we hope you die before you become a supreme leader,” referring to Khamenei’s son after reports of a possible succession to the position of leader.

Iranian state television said that “17 people, including demonstrators and policemen, were killed in the events of recent days.” But the “Human Rights Organization in Iran”, which is based in Oslo, said that it had monitored the killing of 31 people until the end of the fourth day of protests. It quoted local sources that 11 protesters were killed by security forces’ fire in the city of Amal, Mazandaran province. In a statement, the organization appealed to the international community to put pressure on the Iranian government to prevent a rise in the number of victims.

For its part, the Revolutionary Guards called on the judiciary to “identify those who spread false news and rumors on social media and in the street, and those who endanger the psychological safety of society and deal with them decisively,” speaking of “sedition” and “a conspiracy of enemies.” An editorial in the hard-line Kayhan newspaper said: “The will of the Iranian people is: Do not leave the criminals behind.”

Meanwhile, the United States yesterday imposed sanctions on the “moral police” in Iran, accusing it of abusing women, using violence against them, and violating the rights of peaceful demonstrators. German Foreign Minister Annalina Birbock also announced her country’s intention to internationalize the case of the Kurdish girl, Mahsa Amini, by referring it to the United Nations Human Rights Council.
… More