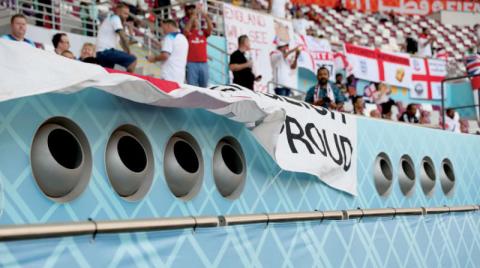 Did Qatar succeed in organizing a “carbon neutral” tournament?

The Qatar World Cup continues to stir controversy in a way that no major sporting competition has done before. While some Olympic tournaments and World Cup tournaments were known to many attractions before the Second World War, and during the escalation of the cold war between the eastern and western camps, the current World Cup has gone far beyond the football dimension, in which the athlete mixed with the political, legal and cultural, in addition to the carbon dimension.

Not far from the heat of the competitions in this world championship and the enthusiasm of its followers, the heat of the weather was the main motive for making the World Cup matches start in the winter season for the first time since its inception in 1930. At the same time, greenhouse gas emissions and their impact on global warming represented another thorny issue raised by the tournament on unprecedented way. In addition to the carbon footprint of the facilities and associated activities, questions were raised about emissions resulting from cooling stadiums during hot periods. The organizers have tried to solve part of this problem by using renewable energies, especially the sun, to generate some of the electricity needs.

Qatar has been witnessing a boom in the field of construction for the football tournament for nearly a decade. It built seven new stadiums, 30 training facilities, thousands of hotel rooms, and expanded Doha International Airport. The country is among the hottest and driest on earth, as it faces worsening heat waves and water shortages as climate change intensifies.

FIFA predicts that this year’s World Cup-related activities will generate 3.6 million metric tons of carbon dioxide, equivalent to the energy consumption of about 460,000 homes for a full year. According to the latest report on emissions issued by FIFA, air travel and accommodation represent the largest source of emissions related to the tournament; Where about 1.5 million fans from all over the world are expected to attend. FIFA and Qatar plan to offset unavoidable emissions with carbon credits, and through other measures such as tree planting.

According to the same report, stadium construction accounts for about 18 percent of the tournament’s carbon emissions. Of the seven new stadiums built for the Qatar tournament, World Cup organizers plan to completely dismantle one stadium and reduce the capacity of the others by almost half. As for the temporary seats, the organizers hold themselves responsible for only 70 days of emissions, which is the duration of the tournament, in addition to the duration of the two World Club Championship competitions that preceded the World Cup.

On the other hand, the Carbon Market Watch group indicates that the methodology that was adopted in the latest FIFA report is not in line with its previous reports, which stated that the age of the stadium could reach 60 years. The group estimates that the total carbon footprint of the six permanent stadiums will be up to eight times the carbon calculations adopted by the organisers.

On the other hand, the eight stadiums used in the World Cup are located about 50 kilometers from downtown Doha. While the high concentration of stadiums reduces emissions associated with fan travel, the facilities could create long-term problems for the city’s 2.4 million residents.

Deciding what to do with the remaining stadiums is a known problem for cities that have hosted major sporting events, such as the World Cup or Olympic Games. These places are known as the “white elephants”, due to their high price and global level, and they often fall into disrepair and occupy a large area and drain local resources.

The organizers of the World Cup in Qatar announced their intention to get rid of all the “white elephants” by drawing up plans to convert the remaining stadiums into community centers, hotels and educational centers. For example, the “Al Janoub Stadium”, which can accommodate more than 44,000 spectators, is scheduled to become the headquarters of Al Wakrah Club. After the World Cup, the capacity of the stadium will decrease to 20,000 seats, and it is not known what will happen to the stadium, which was previously used by the local team, and can accommodate about 12,000 fans.

As for the temporary stadium “Stadium 974”, the organizers have not yet revealed any concrete plans for how or even the possibility of reusing the shipping containers in which the stadium was built. Accumulated emissions during transportation and rebuilding of materials used in the carbon calculations are not accounted for.

FIFA is expected to release an updated report on emissions after the conclusion of the tournament, a measure in line with its many initiatives that seek to achieve three main objectives including making football ready for climate action, protecting major tournaments from the negative effects of climate change, and ensuring that football is made resilient. climatically. But will these initiatives be enough to protect the future of world football tournaments from the effects of climate change?

Over the past few years, many major sporting events have been subjected to extreme weather events. In 2019, a seasonal typhoon caused the postponement of several matches during the Rugby World Cup in Japan. In the 2020 Australian Open Tennis Championships, the air became unbreathable due to forest fires, and in the same year the marathon track in the Tokyo Olympics was moved hundreds of kilometers to the north to escape the high temperature. Concern about the future of the Winter Olympics is growing with the increase in global warming.

Football is not just a victim of climate change, it contributes to an increase in emissions as well. This is evidenced by the carbon footprint of English Premier League players, which is estimated at 29 tonnes of CO2e per year solely from travel, an amount nearly three times the annual carbon footprint of UK citizens, and far exceeding the global target of two tonnes per person for meeting commitments to the Paris Climate Agreement.

The concerns of a number of football federations are currently focused on the issues of low air quality and high air temperature, which may affect the health of athletes, spectators and sports workers, in addition to declining performance. The Major League Soccer has set specific thresholds for organizing matches during hot weather, and the Alberta Soccer Federation in Canada has issued air quality guidelines.

And since conditions of high air temperature will become more frequent in the near future, it is expected that there will be postponement and cancellation of many football matches and tournaments. Fires are likely to have significant impacts on football infrastructure, natural turf pitches will deteriorate due to drought and watering restrictions during the summer, and pitches will be affected by increasingly harsh winter conditions.

A study, conducted in Britain in 2013 and included 460 sports clubs, indicated a loss of between 3 and 13 weeks of using some stadiums annually due to heavy rainfall. In the long term, rising sea waters and frequent floods are likely to pose a temporary or permanent threat to the activities of sports clubs, jeopardizing the future of football in some parts of the world, if greenhouse gas emissions continue on their current trajectory. Floods have already caused the French Montpellier stadiums in 2014 and the British Carlisle stadiums in 2015 to be out of service for several months.

While artificial turf pitches represent an interesting solution that allows matches to be organized over longer periods of the year, these pitches lead to the formation of heat islands, with surface temperatures between 12 and 22 degrees Celsius higher than that of natural turf. A high level of heat increases heat stress for players and increases risks to their health and performance. The same applies to the health of referees, coaches and fans.

Air pollution negatively affects the quantity and quality of passes, the distances traveled and the efforts of high-intensity professional players, and high pollution can significantly reduce the number of goals scored during matches. Decades of empirical evidence suggests that host teams have a higher chance of winning than visiting teams, especially when the opposing team comes from a less polluted city. This is related to the host teams getting used to the air quality in their stadiums, which makes their performance less affected.

Thanks to its reach and ability to reach a wide audience, football can play a major role in environmental transformation, including strategies to mitigate and adapt to climate change. FIFA was one of the first international sports federations to commit itself to the United Nations Sport for Climate Framework, by adopting a strategy in this regard.

And the football world must move very quickly from a reactive approach to a proactive one, by taking a number of preventive measures, at the forefront of which is setting dates in accordance with the weather conditions in the host country, thus reducing the need to cool the stadiums. National and international competitions must also be restructured to reduce travel for athletes and fans, encourage the use of public and shared transportation, and enhance safety measures, such as increasing rest periods during matches, making more substitutions for players, and ensuring protection from the scorching sun for spectators.

One of the most important achievements of the Qatar Tournament was to break down the barriers that hindered holding tournaments in hot regions, by moving the traditional date from summer to winter, and the start of using renewable energy technologies on a large scale in stadiums, so no people are deprived of their right to be part of sporting activities. Globalism. And given that football will not be the only victim and influencer of climate change, urgent action is required by the sporting community as a whole to continue playing safely and with fun.