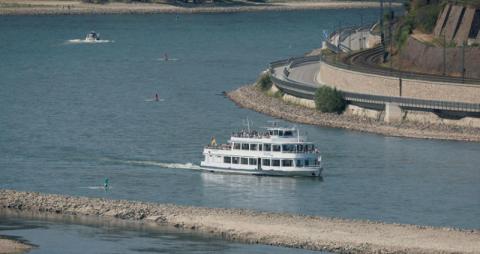 Estimates of the Chamber of Industry and Commerce in Germany indicated a significant increase in freight rates due to the decrease in water levels in rivers, especially in the Rhine, which is of great importance for inland river transport.

In statements to the Deutschland newspaper editorial network, Elijah Nothangle, a member of the Chamber’s executive presidency, said that “the cargo space on ships has become small at the present time because ships can only be loaded partially in most cases, as a result of which freight rates have already increased significantly.”

The Department of Waterways and Shipping of the German government announced that the water level at one of the important parameters for maritime navigation located in a strait in the central Rhine Valley in the state of Rhineland-Palatinate reached 37 centimeters yesterday morning, which is the same level it was at noon yesterday, Saturday, and the administration expected a low level to 30 centimeters today, Monday.

The low level of the Rhine River in Germany has caused two power stations to not get enough coal, which threatens to derail government plans to increase fuel stocks before the onset of winter. A heat wave has caused water levels in some parts of the Rhine to drop to its lowest level in at least 15 years on a seasonal basis, and the river is an important channel for shipping everything on board from coal to oil.

Europe’s largest economy is doing all it can to secure coal for power stations before winter comes, after Russia cut gas supplies to Germany via Nord Stream 1.

The two plants on the Rhine are struggling to secure coal due to the shallow waters, according to publications on the European Energy Exchange. The low water levels make it more difficult for barges to carry heavy loads across the river from the major coal ports in the Netherlands and Belgium.