Erdogan on the Syrian file in Sochi: Discussing it with Putin brings relief to the region 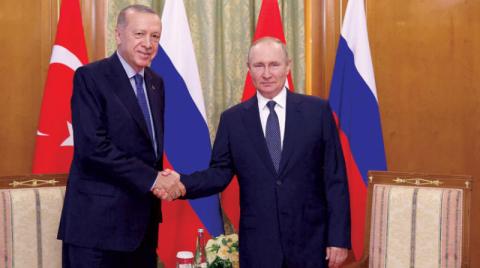 Syria attended again in a Russian-Turkish summit in Sochi yesterday, as the focus of the meeting between Presidents Vladimir Putin and Recep Tayyip Erdogan, who expressed his belief that the talks would “bring an atmosphere of comfort to the region.” Erdogan added that “the solidarity of the two countries in the fight against terrorism is of great importance, and the talks in Sochi support the steps that will be taken in this regard.”

In turn, Putin referred to the discussion of regional issues during his meeting with Erdogan, foremost of which is the Syrian crisis, saying that “Turkey is making a great contribution to normalizing the situation in Syria.”

Russia warned that Turkey would launch a military operation targeting the positions of the Syrian Democratic Forces (SDF), which constitute the Kurdish People’s Protection Units, which Ankara considers a terrorist organization and an extension of the Kurdistan Workers’ Party in Syria, the majority of which are in Manbij and Tal Rifaat, in order to complete security areas with a depth of 30 km in Syrian territory, to serve as a security belt on Turkey’s southern border.

Although Turkey announced the possible operation last May, it has not yet been implemented, despite Ankara’s assertion that it could start at any moment, due to the United States’ rejection of it and European countries.

However, the “Syrian Democratic Council” (SDC) accused Ankara of planning to expand its occupation in Syria.

Hassan Muhammad Ali, head of the public relations office in SDC, told Asharq Al-Awsat that “Turkey is working on implementing an expansion project inside Syrian territory, which it calls neo-Ottomanism.”

He added, “If Turkey is sincere in its calls to fight terrorism, it should get out of Syria,” calling on the Syrian regime “not to be deceived by Turkish statements, because they are an attempt to obtain a green light to occupy the city of Aleppo.”