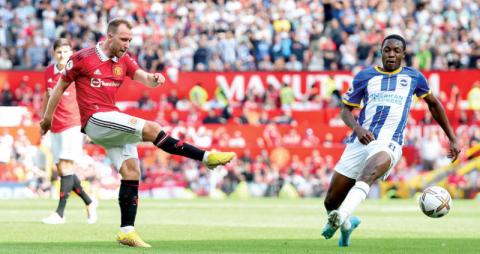 Antonio Conte will lead Tottenham Hotspur against his former club Chelsea on Sunday, in what is expected to be a real test for the London duo very early in the Premier League season.

Tottenham lead the standings after winning 4-1 at home to Southampton in their opening match, and the ambitions of their supporters have been raised with some impressive new signings.

For his part, Chelsea, led by Thomas Tuchel, started their campaign with a 1-0 victory over Everton.

The west London side, which has come under the control of an investment group led by Todd Boley after the departure of Russian Roman Abramovich, has a strong record against Tottenham.

Chelsea have not lost in their last seven games against Tottenham and conceded only one goal during this period, while the visiting team have won only once in their last 37 away matches against Chelsea in all competitions.

Tottenham striker Harry Kane has also failed to score in any of his past five games against Chelsea, who beat Spurs four times last season, including winning twice in the Premier League.

“Against Chelsea last season, I found a big difference in level,” Conte, who took over as Tottenham coach in November, told reporters after Saturday’s game. We played three games in 12 days (against Chelsea last season) and we lost all of them and we didn’t score in them and they were the better side.” “We are starting this season after working for seven months, and this is very important for me because I can now take other steps to apply what we trained on to become even stronger.”

The match, which will be played at Stamford Bridge, is the first of the season between two of the top six clubs in the Premier League, with Chelsea finishing third and Tottenham fourth last season, and both want to make an early imprint.

“I’m worried about Chelsea at the weekend,” said former Arsenal playmaker Paul Merson. If Tottenham win at Stamford Bridge, I will worry about Chelsea trying to finish the season in the top four.”

And defending champion Manchester City will host Bournemouth today (Saturday), and Norwegian striker Erling Haaland is looking to increase his yield after the double he scored in the opening round, which would achieve three valuable points for Pep Guardiola’s team.

Last season’s runners-up Liverpool, who opened their campaign with a 2-2 draw with newly promoted Fulham, host Crystal Palace on Monday.

Arsenal, who beat Crystal Palace 2-0 in the opening match of the season, will play at home against Leicester City, who gave up their 2-0 lead to draw 2-2 with Brentford today.

Brentford hosts rival Manchester United today as well, and the visiting team is looking to avoid losing the first two league games for the first time since 1992.

It is noteworthy that the English Premier League and the First Division (Championship) matches this week, will witness water breaks while the country faces another period of high temperatures in the summer.

The British Met Office has issued a warning of high temperatures, starting from Thursday and continuing into the rest of the week, and will cover large parts of the south of England as well as parts of eastern Wales, the British news agency (PA Media) reported.

BA Media has learned that any match in the First Division or the English Premier League will have drinking breaks to allow players and coaches to rest, with temperatures reaching at least 30 degrees.

Temperatures in the region are expected to reach the mid-thirties.

The West Ham and Manchester City match in the English Premier League last week witnessed a water break, while the same was applied in the English League Cup matches (Carabao Cup) in its first round this week, including the match between Coventry City and Bristol City.

On the other hand, Jurgen Klopp, coach of the Liverpool team, confirmed that he can solve the problems of the midfield through what is available in the team and without resorting to the transfer market.

Thiago Alcantara suffered a thigh injury during the team’s match against Fulham a few days ago, which could keep the Spain international for about six weeks, according to the British news agency (BA Media).

But Klopp confirmed that he explored all possible options, and decided to find solutions from within the team rather than hiring new players.

“Thiago is good, but the injury is not good,” Klopp said. I read that he will be absent between four and six weeks, I hope it will be four weeks.”

He added: “I am happy with the strength, size and quality of my team. We have injuries, but this is possible, now it comes to the period of absence of the players, and the various solutions to overcome that.”

For his part, Newcastle United coach Eddie Howe said yesterday (Friday) that Jongo Shelvey’s absence from the squad for up to three months due to injury is a major blow to the club, despite the presence of a replacement for the injured midfielder.

Shelvey, 30, injured his hamstring during a pre-season friendly against Benfica last month.

As a result, he will be out of action until November. “Gongo’s absence is a big blow,” Howe told reporters before his side’s away meeting with Brighton & Hove Albion. He’s been a very important player for us over the past few seasons, and he’s got great potential and talent in midfield. The injury was not clear or light, so he underwent surgery and we expect him to be out for about 12 weeks.”

“I feel like we have enough to cover his absence at the moment, but in football things can change very quickly, you know,” Howe added, referring to Bruno Guimaraes and Sean Longstaff, who have played in his position before.

Howe confirmed that Shelvey “is in a much better condition psychologically after undergoing the operation.”

Newcastle defeated the newly promoted Nottingham Forest 2-0 in the first round of the English Premier League season.

On the other hand, the French sports newspaper, L’Equipe, revealed that Paris Saint-Germain is interested in obtaining the services of Manchester United striker Marcus Rashford.

The newspaper said that the sporting director of the French capital, Luis Campos, met the 24-year-old player’s business manager.

Rashford’s contract with Manchester United expires on June 30, 2023, but the “Red Devils” team has the right to extend it for an additional year, knowing that the player had recently announced his desire to stay with the team in which he was formed.

Rashford’s performance declined last season, which led to his exclusion from the England squad.

Ten Hag responded to rumors about Rashford’s future, confirming in a press conference on the eve of his team’s match against Brentford in the league: “He is more than ever part of our plans (for this year) and he will remain at Manchester United.”

“He’s really important, I’ve seen him since the first day I got here,” he added. I am happy with him and I do not want to lose him.”

Saint-Germain coach Christophe Galtier had hinted at a press conference Thursday, that the team intends to sign a new striker, especially after Arno Calimuindo moved to Rennes, and the possibility of the unwanted departure of Argentine Mauro Icardi.

“We hope another striker will come, especially with the busy schedule until November 15 and then the World Cup,” Galtier said.

On the other hand, it will not be easy for Manchester United to abandon Rashford, especially as the club is looking to sign one or two strikers in the event of the departure of its Portuguese star Cristiano Ronaldo.