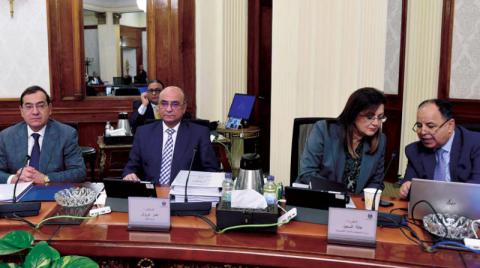 Egyptian Minister of Planning, Hala El-Said, expected to achieve a growth rate of approximately 5 percent by the end of the current fiscal year 2022-2023, “despite the current effects of the Russian-Ukrainian crisis, whose repercussions are likely to extend during the next year.”
The minister said, during her review of the initial indicators of the Egyptian economy at the cabinet meeting yesterday, that the preliminary data showed that “the Egyptian economy continued to achieve a high growth rate during the first quarter of the fiscal year 2022-2023, at a rate of 4.4 percent, despite the challenges posed by three global events.” They are: the continuing repercussions of the Corona virus, the Russian-Ukrainian crisis, as well as the unfavorable effects of climate change.
Al-Saeed presented the seven sectors that most contributed to the GDP during the first quarter of the current fiscal year, namely: agriculture, wholesale and retail trade, restaurants and hotels, construction, real estate activities and business services, social services, and communications and information.
In terms of the unemployment rate, she explained that it “increased slightly, to reach 7.4 percent during the first quarter of the current fiscal year, compared to 7.2 percent in the corresponding quarter of the previous year, and the inflation rate is witnessing an increase, driven by global inflationary upward trends.”
She added, “Global economic growth slowed from 6 percent in 2021 to 3.2 percent during the current year, with expectations of a continued decline in growth rates to reach 2.7 percent during the next year. With a greater decline in the case of advanced economies ».
The minister added that a decline in global trade activity is expected during the next two years, as the current year witnessed a sharp decline in global trade growth rates to 4.3 percent, with a further slowdown expected to 2.5 percent during the year 2023. Affected by the consequences of the Russian-Ukrainian crisis.