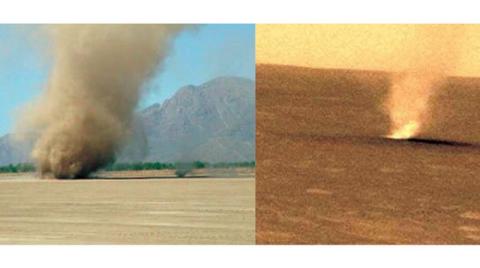 In the Mojave Desert in America, the sun sends its rays to the ground to heat the air near the surface and it rises, to contact with the cold air, forming whirlpools that capture dust, called “dust devils”.
These types of dust devils are not limited to Earth, they are found on Mars with sizes up to 1,600 meters in diameter; This prompted an American research team to try to understand what is happening on Mars through further extensive study of what is happening on Earth, through a research project that was carried out in the Mojave Desert, and announced some of its results the day before yesterday at the meeting of the American Acoustics Society.
And the association’s website quoted a member of the research team in the project, Luis Ortico, assistant researcher at NASA’s Jet Propulsion Laboratory, as saying, while reviewing its details, “It is difficult to study dust devils on Mars; So we sought to study it on the ground, to understand what is happening there, and based on (microbarometer) data from the Mojave Desert, which is an instrument for measuring air pressure with high accuracy, we built an (algorithm) to search for pressure activity that indicates the dust devil, and we found that the vortices that capture The dusts have a clear drop in pressure near their centers, and their pressure fluctuates to look like an EKG signal over time.”
He explains, “We hope that we can employ our algorithm to learn more about the characteristics of the formation of convective vortices and how they move across different landscapes. This will improve the accuracy of Martian weather models, which have a direct impact not only in understanding dust cycles on Mars, but also In the operation of future automated and possibly manned missions to the Red Planet, where this phenomenon plays a major role in the Martian climate, and it is important to understand it during missions to the Red Planet; Their abundance on Mars may have implications for the lifespan of many missions.”