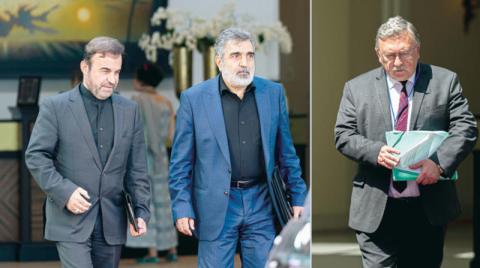 The European Union called on the parties involved in the nuclear agreement with Iran to take “clear and decisive political decisions” to end the talks that have resumed in an attempt to overcome the remaining obstacles, while a European official spoke of “72 crucial hours.”

“It is time for a last effort,” Commission spokesman Peter Stano told reporters yesterday, explaining that the new EU draft came because the space for any additional maneuver had been exhausted.

A senior European diplomat told reporters at the end of the first day’s discussions that Iran had backed away from its demand to remove the Revolutionary Guards from the sanctions list, noting that “it was agreed to discuss the matter in the future as soon as the United States and Iran were able to meet directly,” according to Reuters. ». Tehran also demanded that the IAEA withdraw its investigation into three secret sites.

While the European “troika” demanded in a statement yesterday that Tehran “not make unrealistic demands” in the talks, Bloomberg quoted the senior European official as saying that Iran had abandoned its demand for guarantees that no US president would withdraw from the agreement. According to the official, Iran will, in return, receive specific compensation if any new US administration or Congress cancels the deal again. “The remaining obstacles can technically be resolved within 72 hours, but that will require high-level political decisions in Tehran and Washington,” he said.