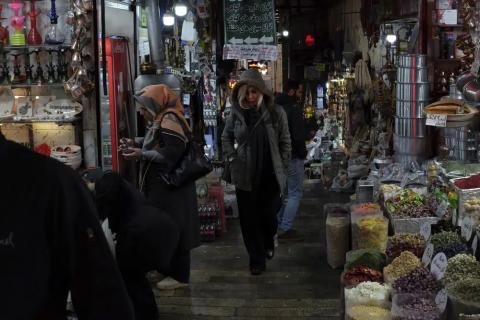 Confusion over the status of Iran’s religious police grew as state media cast doubt on reports the force had been shut down. Despite the uncertainty, it has appeared for weeks that enforcement of the strict dress code has been scaled back as more women walk the streets without wearing the required headscarf.

The mixed messages have raised speculation that Iran’s clerical-run leadership is considering concessions in an attempt to defuse widespread anti-government protests that are entering the third month. The protests were sparked by the death of 22-year-old Mahsa Amini after she was detained by the religious police.

Monday marked the start of another three-day nationwide strike called by protesters. In Tehran’s Grand Bazaar, about a third of the shops were closed, witnesses said. In response, Iran’s judiciary chief, Gholamhossein Mohseni Ejehi ordered the arrest of anyone encouraging the strike or trying to intimidate shops into shutting down.

The morality police, established in 2005, are tasked with enforcing Iran’s restrictions on public behavior and strict dress codes — particularly on women, who are required to wear the hijab, or headscarf, and loose-fitting clothes.

Outrage erupted after Amini’s death in the force’s custody in mid-September, after she was arrested for allegedly failing to meet the dress code. Since then, the protests have expanded into calls for the ouster of Iran’s clerical rulers.

On Saturday, Iran’s chief prosecutor, Mohamed Jafar Montazeri, said the religious police “had been closed,” in a report published by the semi-official news agency, ISNA. He was also quoted as saying that the government was reviewing the mandatory hijab law.

“We are working fast on the issue of hijab and we are doing our best to come up with a thoughtful solution to deal with this phenomenon that hurts everyone’s heart,” he said, without offering details.

But late Sunday, Arabic-language state outlet Al-Alam issued a report suggesting Montazeri’s comments had been misunderstood. The report said the religious police were not connected to the judiciary, to which Montazeri belonged. It underlined that no official has confirmed the closure of the religious police.

It also pointed to Montazeri’s further statement that “the judicial branch will continue its monitoring of behavioral reactions at the community level.”

The hard-line SNN.ir news website said the morality police “has not come to an end and has not closed.” But it added that “its mechanism would possibly change, a point that was under discussion before the riots.” The site is close to the Basij, the feared paramilitary force under the powerful Revolutionary Guard, which is dedicated to protecting Iran’s cleric-led system.

The status of the force could not be confirmed. Officials have avoided comment. When asked about Montazeri’s statement by journalists in Belgrade, Iranian Foreign Minister Hossein Amirabdollahian gave no direct answer.

Still, for weeks, fewer morality police officers have been seen in Iranian cities. Across Tehran, it has become common to see women walking the city’s streets without wearing the hijab, particularly in wealthier areas — but also to a lesser extent in more traditional neighbourhoods. At times, women walked past anti-riot police and Basiji forces.

The anti-government demonstrations have shown few signs of stopping despite a violent crackdown in which, according to rights groups, at least 471 people were killed. More than 18,200 people have been arrested, according to Human Rights Activists in Iran, a group monitoring the demonstrations.

Protesters say they are tired of decades of social and political repression, including the dress code. Women have played a leading role in protests, stripping off their headscarf.

Ali Alfoneh, a senior fellow at the Arab Gulf States Institute in Washington, said an informal relaxation of the hijab law may be the government’s current policy.

“For the time being, rather than changing the hijab law, the Islamic Republic will most likely not enforce the law, in order to reduce tension with society,” Alfoneh said.

Meanwhile, residents said security was heightened in the Grand Bazaar on Monday, the first day of the strike. There have been two previous strikes in the Bazaar in solidarity with the protesters. One shop owner who was open Monday said he had been warned by the authorities not to join the strike after he shut down during the previous one.

Others said they just can’t afford to join in.

“I cannot close my shop though I support the cause of the protests,” said the owner of a headscarf shop, speaking on condition of anonymity for his safety.