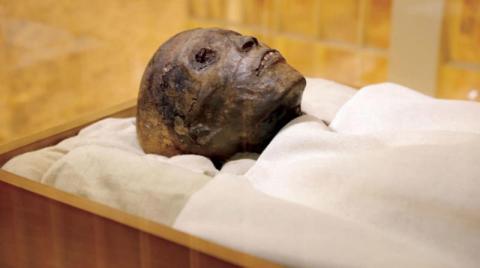 New evidence has emerged that speaks of the British archaeologist, Howard Carter, “stealing” pieces from the tomb of the “golden pharaoh” Tutankhamun, when he discovered them a hundred years ago.

The British newspaper “The Guardian” revealed, in a report, the content of a letter written by British archaeologist Alan Gardner, who was part of Carter’s excavation team, talking about the theft of some of the belongings of Tutankhamun’s tomb. The letter dates back to 1934; Where the discoverer of Tutankhamun’s tomb hired his colleague Gardner, to translate the hieroglyphic texts he had discovered, and sent him an “amulet”, which he said at the time was not one of the possessions of the “Golden Pharaoh”; But the British director of the Egyptian Museum in Cairo at the time, Rex Engelbanch, to whom Gardiner had offered the amulet, was “horrified” upon seeing it; Because it “matches the models found in the tomb of Tutankhamun.” In his letter, Gardner said to Carter: “The amulet you showed me was undoubtedly stolen from Tut’s tomb,” according to what was published by “The Guardian”.

It is scheduled that this message will be published in a book to be published soon by the University of “Oxford” under the title “Tutankhamun and the tomb that changed the world.”
…More