Completion of the largest syndicated loan for the Saudi sovereign fund, at a value of $ 17 billion 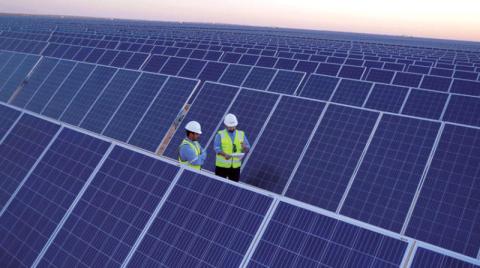 Completion of the largest syndicated loan for the Saudi sovereign fund, at a value of $ 17 billion

An agreement to establish the largest solar plant in the Middle East region, which will be in Makkah Al-Mukarramah, western Saudi Arabia (SPA)

While the “Badil” company affiliated with the Saudi sovereign fund announced a partnership to establish the largest solar power plant in the region, the Public Investment Fund announced the completion of procedures for obtaining a syndicated loan, which is the largest of its kind, at a value of 63.7 billion riyals ($ 17 billion), after its coverage rate exceeded more than twice as much compared to the previous loan, within the framework of the debt instruments policy that the Fund follows to finance its investments.
According to a statement issued, the deal was concluded in cooperation with 25 financial institutions in Europe, the United States of America, Asia and the Middle East for a loan of up to 7 years, indicating that the syndicated loan is the largest of its kind in terms of size and duration and the first of its kind in the number of institutions. Global financial participation in it.
The coverage ratio of the new loan more than doubled compared to the $11 billion loan obtained by the Fund in 2018 in cooperation with 15 financial institutions, which will be repaid ahead of schedule.
The new loan forms part of the fund’s medium-term financing strategy and its financing plan for 2022, which includes several financing tools that ensure the fund’s access to diversified and sustainable financing sources in both the private and public markets.
Fahd Al-Saif, Head of the General Department of Global Investment Finance, stated that the Fund’s obtainment of the new loan is an important achievement, as its value exceeds any of the previously collected loans in terms of size and duration, pointing to the continuation of the search for new financing sources; Contributing to achieving its strategic objectives.
It is known that the Public Investment Fund obtained high results in the credit rating for the first time from the “Moody’s” and “Fitch” credit rating agencies last February, which reflects the creditworthiness of the fund and the quality of its investment portfolio.
On the other hand, the Water and Electricity Holding Company “Badeel” – a company wholly owned by the Saudi Public Investment Fund – and the “ACWA Power” company, a developer, investor and operator of water desalination and power generation plants around the world, revealed the signing of an agreement to establish the largest solar power plant in the world. Middle East and North Africa in Mecca, western Saudi Arabia.
According to a statement issued yesterday, the planned plant will produce a production capacity of 2060 megawatts in Shuaiba, in the Makkah Al-Mukarramah region, where the project is expected to be operated in phases, the last of which will end in the last quarter of 2025.
According to the agreement, the ownership of the project will be jointly owned by the two Saudi companies, “Badil” and “ACWA Power”, at a rate of 50 percent each, by establishing a joint venture company for the development of the project under the name “Second Shuaiba Electric Power Company”.
For its part, the Second Shuaiba Electric Power Company announced the conclusion of energy purchase agreements for the station with the Saudi Energy Procurement Company, as the project is planned to contribute to achieving the Kingdom’s goals in the renewable energy sector, considering the station as a huge project in the field of sustainable energy, which would contribute significantly Pivotal and effective in achieving the goals of the Kingdom’s Vision 2030.
Deputy Governor and Head of the Middle East and North Africa Investments Department at the Public Investment Fund, Yazid Al-Hamid, explained that the project represents an important step within the renewable energy program of the Public Investment Fund, which includes developing 70 percent of renewable energy generation capacity in Saudi Arabia by 2030.
“The service utilities sector and renewable energy is one of the strategic sectors that the Fund focuses on in launching the capabilities of promising non-oil sectors to enhance the Kingdom’s efforts to diversify sources of income,” he said.
The Chairman of the Board of Directors of ACWA Power, Muhammad Abu Nayan, confirmed that Saudi Arabia is moving forward in implementing plans aimed at diversifying the energy mix by moving towards renewable energy sources, indicating that cooperation with “Badil” and the Saudi Company for Energy Purchase to implement this project will be tantamount to a project A new reference for sustainable energy development at the regional level.
“Today, solar energy is one of the main pillars for achieving the best economic, environmental and social results, as we continue to affirm our commitment to developing local content in the areas of technology, supply chains, talent development, and making the most of local capabilities,” he added.
He stated that BADIL and ACWA Power will build, own and operate the second Shuaiba station and sell electricity through it to the Saudi Company for Energy Purchase. When fully completed, this station will supply 350,000 housing units with electricity.
It is noteworthy that the second Shuaiba station is the sixth station for generating solar energy belonging to ACWA Power in Saudi Arabia, while the portfolio of ACWA Power projects locally includes 13 stations for electricity generation, water desalination and green hydrogen production, and BADIL and ACWA Power are working. On the development of the Sudair Solar Project with a production capacity of 1,500 MW, which is the cornerstone of the Public Investment Fund’s commitment to developing renewable energy projects.