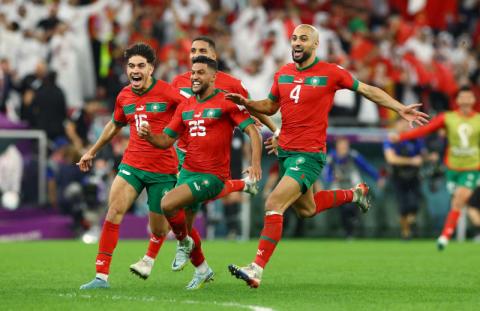 The Moroccan national team continued to make history in the FIFA World Cup finals, which are currently being held in Qatar, and wrote its name in golden letters in the world of the round witch, after it became the first Arab team to qualify for the quarter-finals in the World Cup, after defeating its Spanish counterpart 3-0 on penalties today. Tuesday, in the 16th round of the competition.
The original and extra time ended in a draw without goals, so the two teams ruled overtime, which smiled at the end in favor of the Moroccan team.
The stars of the Moroccan national team performed heroically over the course of 120 minutes and were a true match for the Spanish national team, which won the title in 2010 in South Africa, throughout the four periods, and they were able to snatch the lead during the first half, as well as in extra time, during which the Atlas Lions relied on counter-attacks, At a time when the players of the Spanish national team failed to penetrate the Moroccan defensive forts.
The Moroccan national team is scheduled to meet in the quarter-finals next Saturday at Al-Thumama stadium, with the winner of the Portugal-Switzerland match.
And after the Moroccan national team was the first Arab team to qualify for the knockout stage in the World Cup in the 1986 edition of the competition in Mexico, the (Atlas Lions) team was on a date with history also in that version, after it became the first Arab team to advance to the quarter-finals in the most important and strongest tournament in the world as well. The Moroccan national team became the fourth African team in history to qualify for the quarter-finals, after Cameroon, Senegal and Ghana in the 1990, 2002 and 2010 editions, respectively.
And for the second consecutive edition of the World Cup, the Spanish national team is unable to beat Morocco, after it tied with it 2-2 in the group stage of the last edition of the competition that was held in Russia in 2018.
The match witnessed another historic event, represented by the participation of Javi, the star of the Spanish national team’s midfield, in the basic formation of his team in the match, becoming the youngest player to participate from the start in the World Cup in one of the World Cup elimination rounds, since the Brazilian star Pele.
At the age of 18 years and 123 days, Javi, the Barcelona player, became the youngest player to participate in a World Cup knockout match since Pele, who played in the 1958 World Cup final in Sweden, at the age of 17 years and 249 days.

Morocco is a sport

America strengthens its military presence in the Philippines

Raising interest in the Gulf, Europe and England

Sudan and Israel… cooperation on the road to normalization