Blinken: We are working with Saudi Arabia to extend the truce in Yemen 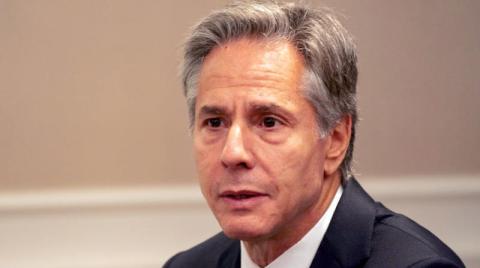 US Secretary of State Anthony Blinken announced, during a joint press conference with his Chilean counterpart Antonia Oriola in Santiago, that the United States is “working closely” with Saudi Arabia in an “attempt to extend the armistice” in Yemen.

This coincided with the UN Security Council’s call on the Houthis, “in particular”, to “refrain from provocation and return to negotiations to extend and expand the truce.”

The council expressed “extreme disappointment” at the Houthis’ failure to engage with the UN envoy to Yemen, Hans Grundberg, to extend the truce for another six months, following the “extremist demands” of the Iranian-backed group.

Meanwhile, the Security Council’s Sanctions Committee announced imposing sanctions on three leaders of the Houthi militia, for their involvement in terrorist activities.

The committee formed in accordance with Security Council Resolution No. 2140 said that it had included Ahmed Al-Hamzi, the commander of the Houthi militia’s air and air defense forces, the drone program, and Mansour Al-Saadi for his role as Chief of Staff of the Houthi Navy, his orchestrating attacks against international shipping in the Red Sea, and his contribution to naval efforts. Houthi forces directly threaten peace and security in Yemen, and Mutlaq Amer Al-Marani, former deputy head of the National Security Agency, which is controlled and run by militias.

For his part, Deputy Chairman of the Yemeni Presidential Leadership Council, Aidarous Al-Zubaidi, pledged, during his meeting with the Egyptian ambassador to Yemen, Ahmed Farouk in the Saudi capital, Riyadh, yesterday, to respond firmly to any Houthi military escalation after the end of the truce a few days ago.
… More

5 killed in a helicopter crash in South…

In the countries of the North and the…