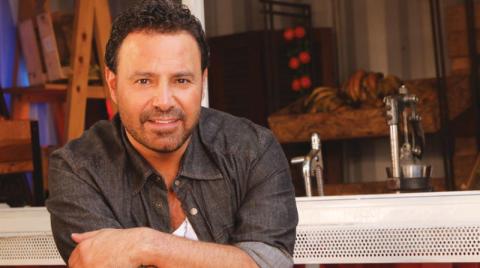 34 years have passed since Assi El-Hellani competed on the stage of “Studio El Fan”. From that program, he came out with a gold medal and a voice with a lot of solid nature. During the nineties, Ibn Baalbek gave life to the Lebanese folk song. He added a new color to its colors, which he called the “Al-Halani Color”. With him, I modernized “Al-Dalona” and “Al-Hawara” and wore a youthful robe.

About the beginnings, the Lebanese artist says in an interview with Asharq Al-Awsat: “I yearn for the time of struggle and fatigue. These are my best memories, despite their difficulties and challenges. During that period, the first features of my success emerged, and I am grateful for my launch, which witnessed a lot of fatigue, anxiety, staying up late, and endless struggle.”

Today, after more than 3 decades of success, the struggle has turned into perseverance. The only constant is passion. Al-Halani explains: “Art for me is more of a passion than a profession. I still have that passion. For his sake, I persevere and strive for development and renewal.”

Al-Hillani realized early on that if he wanted to penetrate the generations of listeners and all audiences throughout the Arab region, he had to dare to diversify and color. It is true that the audience loved the folklore cloak and the Bedouin singing style, but Al-Halani was determined to expand his musical horizons. According to his artistic dictionary, he who does not dare to change never develops.

Many may yearn for that “the sinner who comes on his skill from the inventory and his river”, but he does not let nostalgia distract him from imposing continuity, although the Lebanese heritage color remains the closest to his heart, as he says.

The secret of this continuity has two main components that Al-Halani reveals: “Renewal and keeping pace with the times musically, here everything begins. Music develops through generations and must be kept pace with, but while preserving themes with appropriate meanings and melodies that characterize the oriental whiff.”

Al-Halani did not hesitate long before he moved from folkloric and Bedouin songs to the field of multi-dialect pop song, with full conviction. But this did not happen without causing a shock to the audience, who was astonished by the shift from “Wani Mareq Marit”, “Ya Mima” and “Mali Sabr”, to songs such as “Dim Doom” and “If Iqan Alia”.

Al-Halani returns and attributes this to his constant and continuous desire since the nineties to develop: “Initially, it was characterized by heritage and folk songs, then it was transferred to the Bedouin color, until the shift that surprised people came. Those modern songs such as (Bahebak and Baghar), (Al-Hawa Tayer), and (Metal Lie) required daring at the level of the move, and I have that audacity. I’m not the hesitant type. Of course, I am constantly worried, but at the same time I have the audacity to change. I seek development and renewal through the various patterns that I present.”

In the context of this diversification, comes Al-Halani’s latest songs, “Arbaeen Khamseen”. The Iraqi song, which was composed by the artist Adel Al-Iraqi and participated in singing alongside Asi, was written by Dia Al-Mayali. As for the video clip, which has a youth character, it is directed by Ahmed Al-Munajjid.

On the basis that “Social media has become a part of our lives and we cannot not go along with it,” according to Al-Halani, he uses his pages on social media for the intensive marketing of his new business. Although he admits, he prefers the time of paper, magazines, newspapers, the smell of ink and cassette tape.

Continuity is also glimpsed by Al-Halani in the path taken by his two sons, Al-Waleed and Marietta. He does not impose his opinions or tastes on them, but he watches them from afar and intervenes when the situation calls for it. On the role of the artist father, who was not a stumbling block in the way of his two sons when they decided to enter the artistic field, singing and acting, he says: “The priority for me is that they have independence of opinion. Of course, I monitor their work, but I leave the choices to them, and I do not impose my opinions on them. If I am not convinced, I will share my observations with them.”

No halal family gathering is complete without Dana, the youngest daughter who has made her own path into a different art form, cooking. Al-Halani talks about his small family, saying: “The thing that makes me laugh and makes me the most happy is being with my family. No one like my children can fill my heart with joy and put a smile on my face.” As for his marriage, he attributes the reason for its continuation to the true love he shares with his wife, Colette, and the respect they exchange, in addition to their strong attachment to their children, who are one of the secrets of the success of this marriage.

One of the times dear to his heart, too, is the one he spends with his horses on his farm in the Bekaa Valley. The title “Knight of Arab Singing” did not come in vain to Assi El-Hellani, equestrianism is his primary sport and his second passion after music. But if he wants to travel through time and space through a song, he listens to the songs of the giant Wadih al-Safi.

Without going into the nomenclature, Al-Halani does not hide his admiration for some of the new emerging voices, but he advises all these talents to persevere and polish their voices. He says: “Stardom does not happen suddenly. It requires study, perseverance, and in-depth knowledge of folklore and heritage.”

Al-Halani is preparing for a series of concerts and tours, starting soon at the Opera House in Cairo, passing through Riyadh, and then moving to Australia and then Canada. And between the station and the station, the main share of Lebanon remains. He was the one who presented a song that almost turned into an anthem, in which he said: “Say that you are Lebanese.” He still clings to hope for his homeland, despite the difficulties and challenges that almost obscured the sun from the foreheads of the Lebanese.