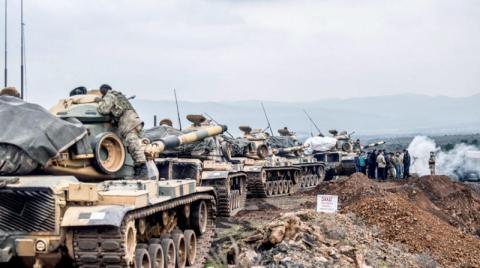 Washington called on Ankara to “immediately stop” its military operations in northern Syria. Pentagon spokesman Patrick Ryder said that Turkish military operations “threaten the security of American soldiers, as they target sites of the (Syrian Democratic Forces) in which American forces are deployed.” Ryder expressed American concern about the escalation of tension, noting that this “threatens the progress” that the international coalition has been making for years to weaken and defeat the terrorist organization “ISIS”.

Meanwhile, the Russian Special Envoy to Syria, Alexander Lavrentiev, expressed hopes that Turkey would refrain from carrying out its ground military operations in northern Syria. He said, “No one wants to escalate tensions, not only in the northeastern region of Syria, but also throughout the region, so there is still hope that Turkey will abandon the process.”

For his part, the commander of the “Syrian Democratic Forces” (SDF), Mazloum Abdi, announced “the cessation of coordination” with the US-led international coalition for the war against ISIS, because his forces were preoccupied with the Turkish attacks, noting at the same time that “the coordination of work with Russia has been affected.” on the ground as a result of those attacks.”

He again expressed his “disappointment with the weak American and Russian reaction” to Turkish President Recep Tayyip Erdogan’s threats to launch a new ground offensive.

It is noteworthy that the “SDF” announced in a statement that 25 members of the Syrian regime forces and 11 of its militants have been killed since the start of the Turkish bombing of northern Syria at dawn last Sunday.