Al Thawadi: The World Cup Final coincided with the National Day, the culmination of 12 years of efforts 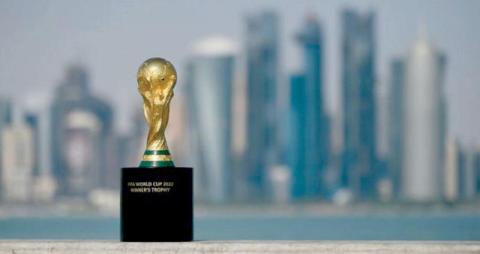 He said hosting would teach young people the possibility of “achieving the seemingly impossible.”

Hassan Al-Thawadi, Secretary-General of the Supreme Committee for Delivery and Legacy, organizing the 2022 FIFA World Cup, confirmed that the final of the tournament, which will be held at Lusail Stadium on December 18, coinciding with the National Day of the State, is the culmination of 12 years of continuous work. In preparation for the global event, starting from the moment Qatar submitted its bid to host the tournament.

Al-Thawadi said, in a press statement on the occasion of the start of the 100-day countdown to the start of the whistle, yesterday (Friday): “We have come a long way and accomplished a lot in a relatively short period. ; We have succeeded in establishing a distinguished infrastructure, as we have provided a world-class level in the field of hosting sporting events, and we have completed many projects on the humanitarian and social levels that benefit Qatar and the world.”

He continued: “We emphasized from the first day that it is not just about organizing football competitions over a period of 29 days; We seek to provide an inspiring role model for future generations. We wanted to teach young people in Qatar and the Arab world the possibility of achieving what might seem impossible. Many doubted that Qatar would be able to host a tournament of this magnitude, but everyone is now witnessing our ability to make it happen on the ground.”

For his part, Engineer Yasser Abdullah Al-Jammal, Director-General of the Supreme Committee for Delivery and Legacy, which is responsible for organizing the Qatar World Cup, praised the role played by everyone in the Supreme Committee and its partners on the way to preparing for the tournament.

Al-Gamal was involved in preparing to host the tournament from the first moments, and played an important role in implementing the infrastructure needed to host the World Cup, including the seven stadiums that were completely built specifically for the World Cup, as well as the development of Khalifa International Stadium.

Qatar is preparing to welcome football fans in the first edition of the World Cup to be held in the Arab world and the Middle East, to give fans from all over the world an opportunity to learn about Qatar, the region and the authentic Arab culture.

In a press statement, El-Gamal said: “We are proud of the projects we have accomplished, and the efforts we have made over the past years to implement them to the fullest.”

He continued, “It was just dreams, ideas and visions, and now we have a state-of-the-art integrated infrastructure and outstanding facilities that everyone uses every day.”

On the other hand, a company linked to contracts with the International Football Association (FIFA) to sell exclusive packages to the rich and famous expected to achieve record sales in the Qatar World Cup, with its owner assuring that the tournament will be of “good value” for all fans.

Wealthy fans will come from all over the world on private planes and yachts, said Jaime Byrom, chairman of Match Hospitality, which has a partnership deal with FIFA to organize hospitality packages for the World Cup matches and has already booked 450,000 tickets for the finals.

Packages range from $700 for a premium ticket with a quick meal to a bill of more than $1 million, should a large group decide to stay in luxury hotels and attend a number of matches.

Bayrom refused to reveal the prices of the “Pearl” hall in Lusail Stadium, which will host the final of the tournament.

The 116 seats overlook the center line and guests will receive special gifts, and the food will be prepared by British Michelin-starred chef Jason Atherton.

He stressed that the luxury at the World Cup in Qatar “will exceed anything we have previously provided,” explaining that “there are people who will not spare any expenses to be here.”

According to Bayrom, they “will bring their own yachts and planes, and they will certainly benefit from their wealth. But this is only a minority of people.”

He continued, “There are people who are more fortunate to have money than others, and they will experience some experience that is beyond the reach of the majority of us.”

Byrom confirmed to AFP that “Match” will exceed the record revenues and 230,000 packages that were sold in Brazil.

“We are very close to beating the record we set in Brazil, and we know from previous experiences that the last three months are the key to the success of the competition,” Berom said.

Match says Mexico, the United States, Britain and Argentina have the highest number of hospitality packages. But Qatar, Saudi Arabia and the UAE are the highest in terms of revenue.

India, Hong Kong and Bangladesh are also among the top ten countries in terms of purchase, which reflects the popularity of football around the world.