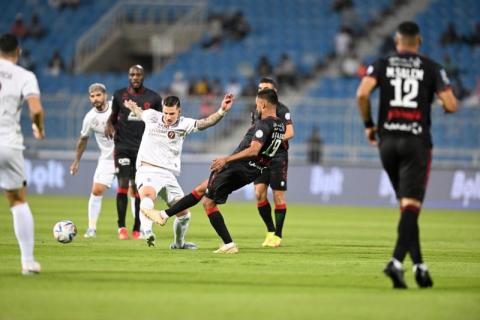 “Al-Shabab” was at the top of the list of the Saudi “Roshen League”, after achieving its sixth victory in a row, this season, against “Al-Raed” with a single goal without a response, in the sixth round of the league.
With this victory, “Al Shabab” raised its score to 18 points, continuing its flight at the top of the standings, while the Al-Raed team’s journey of victories stopped after two rounds in which it won, so that Al-Raed’s balance freezes at the ninth point, and he misses the opportunity to advance in the standings.
“Al-Shabab” expanded the difference with its runner-up “before the start of this round” Al Hilal team to five points, a few days before the expected meeting between them, in the seventh round of the league, so that “Al Shabab” continues its ideal steps, this season.
He attended the only goal of the youth team meeting with the 22nd minute, after Mohamed Salem, Al-Raed’s defender, mistakenly turned the ball into his team’s net, while all the Al-Asimi team’s attempts to increase his goal in Al-Raed’s net were unsuccessful.