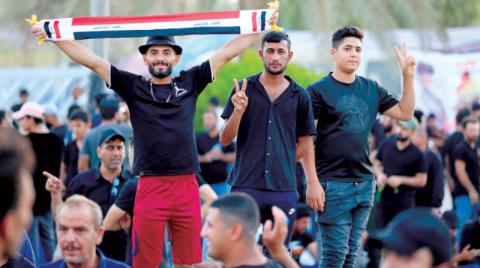 It seems that the leader of the Sadrist movement, Muqtada al-Sadr, is determined to “zero” the Iraqi street in his favour, and prevent his opponents in the “coordinating framework” from settling at the approach of the Green Zone, in central Baghdad, by calling for a “march of two million” towards the capital.

While al-Sadr’s supporters are holding a sit-in in and around parliament, supporters of the “coordinating framework” are holding a sit-in on the walls of the “green” and are divided into three groups: an organization known as “Al-Bashaer” led by the leader of the State of Law coalition, Sadr’s most prominent rival, Nuri al-Maliki, and supporters of “Asa’ib Ahl al-Haq” led by Qais al-Khazali, and supporters of the Wisdom Movement led by Ammar al-Hakim, while the “Badr Organization” led by Hadi al-Amiri, and the “Hezbollah Brigades” were absent.

A spokesman for al-Sadr, known as the “minister of the leader,” attacked the political forces that sponsor the sit-in demanding the convening of parliament, the election of the president of the republic and the assignment of the prime minister. The wretched (…) Let us send a million-popular message to the whole world that Iraq is with reform and reform is with Iraq, and there is no place for corruption and the corrupt.”

In addition, while the Supreme Judicial Council announced in a statement yesterday that it “does not have the authority to dissolve the parliament,” which is what al-Sadr demands, the option that is still open to the Shiite leader may be to resort to the “Supreme Federal Court.” Three activists who have already filed lawsuits with the Federal Council to consider constitutional violations and the penalty for dissolving parliament said that the relevant judicial authority may consider the cases this week, while an Iraqi lawyer connected to the file expected them to be accepted as “form”.