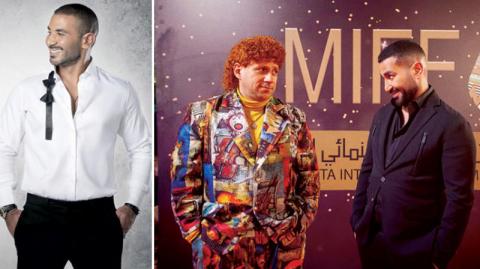 Egyptian singer Ahmed Saad is now overjoyed after his recent successes. Saad said in an interview with “Al-Sharq al-Awsat” that “the song (Aliki Oyoun) has topped the polls in Egypt and the Arab world for more than a month,” adding that his social stability helped him technically recently: “My social life has become very stable, and God blessed me with (Olia), which She came to the world with goodness.

Saad, who began preparing for new songs that he will present in the summer, confirmed: “It is a great honor to have my song shown in the episodes of an international series such as (Moon Knight), pointing out that this matter places a great responsibility on his shoulders, and motivates him to “reach the world,” as he described it. And the text of the conversation:

> Your songs “Aleki Oyoun”, “Sahabi Al-Jada'” and “Tawbah” topped the watch lists in Egypt over the past four months… How do you see this?

– I am overjoyed with these successive successes, which I have achieved during the past short period, and this is evidence that I have become fully focused on my artistic work, and I do not pay attention to any harassment, and praise be to God, the song “Aliki Oyoun” is one of the most listened to in Egypt and the country. Al-Araby during 2022, and it topped the referendums in Egypt and the Arab world for more than a month, as well as the song “Sahbi Al-Jadaa” that I presented as a charitable advertisement with the child Muhammad Osama in the month of Ramadan, as well as the sequence of the series “Repentance” by my brother, the artist Amr Saad, which was the most listened during the holy month.

> Were you planning from the beginning to release the full song “Aliki Oyoun”?

Very frankly, I did not plan to release a full song titled “Aliki Oyoun”, all that is, is that I presented a small clip (couple) in “Valentine’s Day” without naming it any title, but the great success of “The Coblet” » He made me complete the work on it and put it up, and thanks to God, the song was the most listened to in Egypt and the Arab world and achieved 14 million views in a short period of time.

> Some assert that your family life has become stable now… What is your comment?

I thank my wife, Alia al-Basiouni, for what she has done with me during the recent period. She has a great role in this success, and my social life has become very stable, and God blessed me with my daughter, Alia, who came to the world with goodness.

> You topped the trend after you appeared with the artist Ahmed Makki in the series “Al Kabeer Awi”, how do you evaluate this matter?

Success is an essential feature in all the works of the artist Ahmed Makki, because he is a great artist and has great popularity throughout the Arab world, and he is an artist who respects his fans and never causes problems, and when he offered me the idea of ​​participating for several minutes in the last episode of the series, I immediately agreed, Because I was confident in presenting a good job, and, thank God, the scene achieved great success and topped the search engines and views on YouTube as well.

> He drew attention to the dance that appeared with Makki in the series, who designed it?

– I am currently pursuing a profession other than singing, which is choreography. After the dance I designed for my famous song “Sairina Ya Donia” for the movie “For Zico”, and became a “Trend” in the Arab world, my dance with Makki achieved the same success in the series “ Big Oy.”

> How would you rate your experience of participating in singing in the international American series “Moon Knight”?

It is a great honor for my song to be shown in the episodes of an international series such as “Moon Knight”, as this puts on my shoulders a great responsibility, which is for my upcoming works to be developed and able to compete globally, especially after I saw the comments that came on the song after it was shown in The series, I found hundreds of comments praising it and composing it from citizens of America and South Africa, something that makes a person proud of himself.

> Tell us about your relationship with the artist Bahaa Sultan after he participated with you in reviving a concert in Cairo?

Baha Sultan, for me, is not just a singer or a professional colleague, but he is a brother and we are ten long years old. It is enough that before I took the path of singing, I used to go to his concerts to watch him while I was behind the stage to enjoy his voice and his songs.

> What about your new songs?

I started preparing for several new songs scheduled to be released in the summer, including an Egyptian song whose name has not been settled, which will be released on the platforms next July.