Abed Fahd to Asharq Al-Awsat: The Ramadan absence worries me and I learn from my mistakes 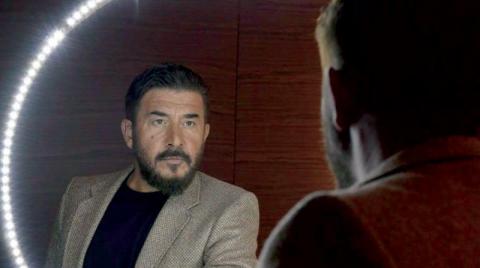 Abed Fahd has the audacity to admit his “missing stab.” He accepts criticism of the type: “This series is disappointing, your approval of it is a mistake.” We meet in the “lobby” of the Beiruti Hotel, where he is staying during the filming of “Shti ya Beirut”, with the camera of Elie Semaan. Although autumn clings to summer, a hot cup of flowers on the table looked delicious. Speaking with the confidence of a seasoned player, he looks forward to his skills first and then the team’s skills, and he says to “Al-Sharq al-Awsat” frankly: “The absence in Ramadan worries me.” He likes competition, empty stadiums are not for the big players.

Who is the most amazing female heroine? He answers: “Sulafa Mimar. I don’t hesitate to accept a job that brings us together.” And she smiles kindly in his mind. In “Shti ya Beirut”, Lynn stops him by surprise: “She has a little ogre that will surprise people.” The man sitting on the sofa, looking back at the past with the eye of the lesson. In his opinion, it is impossible to succeed without mistakes.

In Lebanon, “Oh Beirut,” depicts the pain. A story that begins in Damascus and ends here in the city that insists on life. The series consists of thirty episodes, simulating those tired of poverty, hunger and war wounds, posing crucial problems: does the circumstance affect only the ignorant, or everyone? Are the poor affected more than the rich? Who is the one who makes the decision to be wise and not fall into the trap of going backwards? There seems to be a panting and an accelerating state of running after an unseen future. The result: disasters are exacerbated by the human being, to the extent that they become an intimate affair, so he reconciles with any calamity and becomes a part of it. As if there was an agreement between them under the table.

He praises director Elie Samaan: “His camera is sensitive, and he treats the actor well.” Fahd’s name in the series is “Abdullah”, and he is a simple and faithful character. Dima Bayaa plays the role of “Maryam”, his greedy cousin in the first episodes. A guest star pushes events in another direction.

He returns to “Al Sabah Brothers” after experiences that were not as they should be. On the agenda are three series: “Shti ya Beirut”, and a Ramadan series with Sulafa Mimar and Mutasem Al-Nahar. No name has been settled. The two works of “Al-Sabah”, with a third historical production of “MBC” about the biography of Jamal Pasha Al-Saffah, entitled “Years of Love and Departure”. Filming Ramadan work has not started, “and this is a crisis we face every year. We read the text, coinciding with the end of (Shti ya Beirut), and we are in a race against time. Is it decided for the next Ramadan? “This is what is supposed, unless circumstance intervened. The first three episodes are the most difficult, and then the map becomes clear.”

The absence of Ramadan worries him, yet he refuses to accept any work to silence the anxiety. We tell him that “350 grams” (last Ramadan), was not a milestone. He is quick to reply: “On paper, it was better,” and he explains: “It should have been filmed in Lebanon, and the pandemic blew up the plans. The environment is an essential part of the project’s success. It is his home and nursery. The alternatives are sometimes difficult. The circumstances of the birth of work cannot be underestimated.”

The platforms dispel concerns about the prices of the star’s exit from the Ramadan race, as series that reap the echoes without the hustle of the huge competition. An inner voice incites Abed Fahd to enter the Ramadan fun and lead it: “The challenge means that there are twenty players, and one or two players win the game. Adventure kills boredom.

We ask for an honest answer about the importance of the heroine’s name in series starring Abed Fahd. He has a principle: “My stadium is the basis, whatever the level of the player is with me.”

He does not hide the importance of the partner in the “Game” and worries if he is weak. It’s like playing in a place with very little air. “How do I shave then?” He likens the scene to the logic of weights: “If I exaggerate the loads, the weight loses and I may fall.

Here is the director’s role in controlling exaggerations. Overplaying to save a harmful hero or heroine. Great actors make success.”

He admits to professional “failures”, such as the series he recently presented, based on a wrong “casting”. Don’t you get involved? He answers that he is trying to intervene, but sometimes he is surprised by the decisions of the production company and the director: “The latter is the captain of the ship, and getting into a fight is futile, which casts unhealthy shadows on the psychology of the work. Then, I will not repeat the same experience again.”

The lesson of the profession: “For forty years I presented historical and contemporary works. It is okay if some of them fall off, the slip will turn into a lesson. An actor cannot maintain one level throughout the journey.”

What are you looking at choosing a character? The most important thing for Abed Fahd is the performance of a new character that he did not know before. She has to provoke him in one aspect. Even a good man, tempting questions hover around his goodness and roots. Experience teaches him that it’s also fun to put a boring character back in an interesting setting. He was not the same abuser in the “game of death.” In Lo, he is not someone who is asleep on one side in his place, bed or work, but feels everything that is going on around him: “I am looking for renewal and different experiences.”

man of historical roles; From Al-Hajjaj to Al-Zahir Baybars and Al-Jassas in Al-Zeer Salem. These personalities hold him responsible, as her story is well known. Abed Fahd plays in danger zones: “The challenge is to dive into the role and add to it. And to unite with the character, and I became Al-Hallaj and I became the thief. I feel the desire to defeat him. If he witnesses the performance, he should say: Yes, that is me! The series is led by the camera of Al-Laith Hajjo, the bearer of the trust after the great late Hatem Ali. A director who does not allow his imagination to transcend reality.

When he filmed a “minute of silence” in Syria, he had not visited it for work since “the birth from the waist.” On one of the nights in Damascus, while he was filming in the Mezze, he felt an energy extending to his body, as electricity was pumped to charge an empty battery. He wandered around, as if embracing him: “This is Syria for me: the streets, the environment, the memory, the protected back.”

He loves Beirut, which shares human pain and emptiness with his homeland.

He lists the scene of fog in Dahr al-Baydar and the fresh air; He returns from Batroun and Amchit with beautiful pictures of a homeland whose children ask unanswered questions: “Why? till when? And to where?” “Our countries are loved by God, but some of their children do not like them.” Believe.