A Lebanese “death boat” sinks off the Syrian coast of Tartus 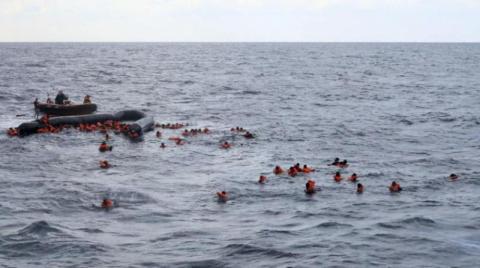 The Syrian authorities found 34 dead bodies on a boat that set off from Lebanon and sank off the city of Tartus in Syria, amid Lebanese information that the “death boat” included Syrians, Palestinians and Lebanese on an illegal immigration journey towards Italy.

While the search for the missing persons continued, the Syrian Ministry of Transport announced yesterday that 34 people had been found dead off the Syrian shores, days after their boat set off from northern Lebanon. “Our cadres are now working with all their efforts to rescue a marine boat (…) in front of the Al-Mentar area, Arwad (Island) and several sites on the Tartous beach,” the Director-General of Seaports, Brigadier General Samer Kobesari said in a statement. He explained that 14 people were rescued, noting that 8 of them were treated at Al-Basel Hospital in Tartous.

The statement quoted survivors as saying that “the boat set off from Lebanon – Miniyeh (north) several days ago with the intention of emigrating,” with passengers of several nationalities on board. Searches are still underway for survivors, with fishermen participating. It was not clear at the time the number of passengers on the boat.

Lebanese sources said that the boat was heading to Italy, carrying about 150 Lebanese, Syrians and Palestinians, and set off from northern Lebanon 48 hours ago.

Lebanese media indicated that search operations are continuing, with the participation of the Syrian ambulance system, the Red Crescent, the Syrian Civil Defense, and a large number of families.