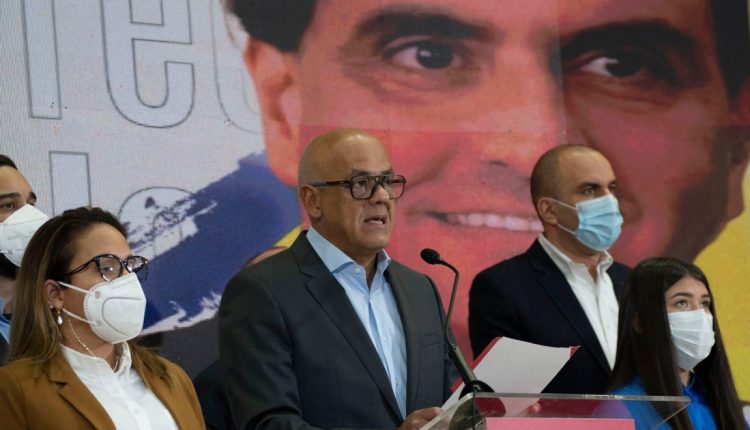 Alex Saab, who was arrested in Cape Verde last year, extradited to the US to face money laundering charges.

Venezuela’s government says it will suspend negotiations with its opponents after the United States extradited a close ally of President Nicolas Maduro to face charges of money laundering.

Jorge Rodriguez, who heads the government’s negotiation team, said on Saturday that his team will not attend the next round of talks in Mexico City.

He called the decision “an expression of our deepest protest over the brutal aggression against” businessman Alex Saab.

The 49-year-old was arrested in Cape Verde in June 2020 when his plane stopped in the West African island nation to refuel. In September, Maduro’s government named the Colombian-born businessman as a member of its negotiating team in the talks with the opposition.

His extradition to the US was announced on Cape Verde’s national radio on Saturday.

Juan Guaido, the leader of Venezuela’s opposition, hailed the prospect of soon seeing one of Maduro’s top allies behind bars, while also condemning the government’s decision to suspend negotiations.

“With this irresponsible suspension of their assistance in Mexico, they evade once again urgent attention for the country, which currently suffers from extreme poverty of 76.6%,” he said on Twitter.

Saab is expected to make his initial appearance in court on Monday in the state of Miami, according to a spokesperson for the US Department of Justice.

Nicole Navas Oxman also expressed gratitude and admiration to Cape Verde’s government for what she called its professionalism and “perseverance with this complex case”.

The Department of Justice charged Saab in 2019 in connection with a bribery scheme to take advantage of Venezuela’s state-controlled exchange rate. The US also sanctioned him for allegedly orchestrating a corruption network that allowed Saab and Maduro to profit from a state-run food subsidy programme.

Saab’s lawyers have called the US charges “politically motivated”.

In a Twitter post, Colombian President Ivan Duque called Saab’s extradition “a triumph in the fight against drug trafficking, money laundering and corruption by the dictatorship of Nicolas Maduro”.

Meanwhile, two sources told the Reuters news agency that the Citgo 6, who were arrested in November 2017 after being summoned to a meeting at PDVSA headquarters in Caracas, were taken from their homes to one of the headquarters of the intelligence police.

The former executives had been released from jail and put under house arrest in April.

The group is made up of five naturalized US citizens and one permanent resident. The US government has repeatedly demanded their release.

“My father cannot be used as a bargaining chip,” said Cristina Vadell, daughter of former executive Tomeu Vadell. “I’m worried for his health, even more given the country’s coronavirus cases.”