Venezuela burns through cash to shore up new bolivar 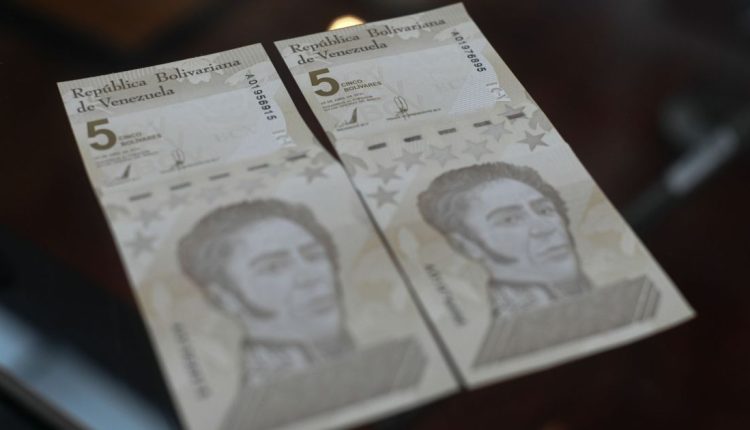 Venezuela’s central bank has injected around $40m per week into the exchange market after launching a new version of the bolivar with six fewer zeros.

Venezuela is moving to prop up its national currency after the launch of a new version of the bolivar with six zeros caused prices to spike.

The central bank has injected around $40 million per week into the exchange market following the Oct. 1 introduction of the so-called digital bolivar. That’s about double the amount it normally sends to banks.

So far, it’s worked. The exchange rate on the street – known as the parallel market – was 4.1 bolivars per dollar Tuesday. The currency had weakened to 5.2 per dollar in advance of the digital bolivar’s introduction as Venezuelans rushed to get their hands on greenbacks.

Around the capital, Caracas, the roll out of the new currency was accompanied by a sharp price increase. The cost of a basket of eight basic products rose 13.7% the week of the currency’s launch, the second-highest weekly increase of the year, according to political opposition-led Finance Observatory. However, after the central bank’s intervention, the price of the basket returned to pre-conversion levels, said opposition lawmaker Angel Alvarado, a founder of the observatory.

“The question is whether the central bank has enough cash to support this policy and, therefore, if it’s worth it,” Alvarado said.

As of September, international reserves sat at a 30-year low, as the government sold off gold for much-needed cash. In the past month, the central bank added $5 billion to its reserves level, an amount that corresponds with borrowing rights allocated by the International Monetary Fund. However, Venezuela can’t access the IMF funds because members haven’t agreed on who is the country’s legitimate leader. 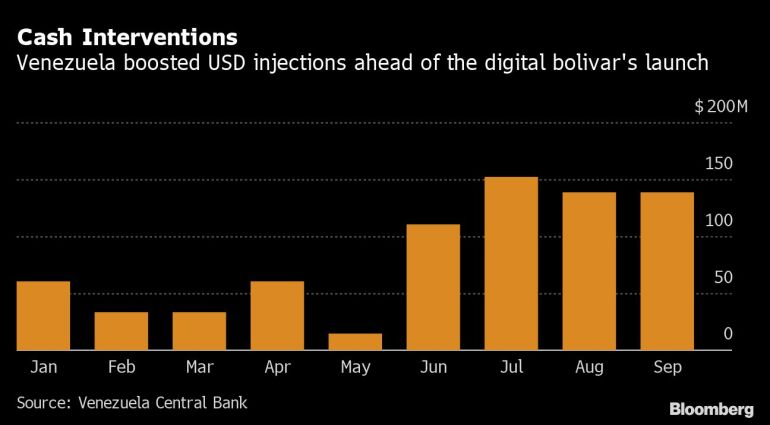 Venezuelans have struggled with hyperinflation since 2017. Although price increases have decelerated this year, they remain sensitive to the exchange rate volatility. The value of the bolivar had been eroded to a point that accounting systems could no longer support the long figures.

The re-denomination of the currency – the third one since 2008 – was intended to make commercial transactions easier. The government introduced a family of new coins and bills, the largest, for 100 bolivars, worth around $24.

Yet, banks have been mostly supplying the lower denominations of 5 and 10 bolivars. Dollars are still doing the most cash transactions, even in low-income sectors.

Fearing the volatility of the bolivar, Adrian Vegas has kept prices in dollars for goods at her small shop on the outskirts of Petare, a slum in Caracas.

“Imagine having to change prices in bolivars every day,” she said.

President Nicolas Maduro’s administration had already been letting the economy slide into an unofficial dollarization and bolivars are now mostly used to pay for public transportation, subsidized gasoline.

“People see a price and they don’t even think about the digital bolivar. They think dollars,” said Jose Estrada, manager of a butcher shop. Still, he said this latest currency conversion was “easier,” because before the reconversion even the most basic staples were priced at several million bolivars.

That may be short-lived, however, unless the government is able to control inflation, said Jose Manuel Puente, an economics professor at the Public Policy Center of the Institute of Higher Education in Management (IESA).

“Currency conversions are cosmetic measures that have no effect on income, expenses or the macroeconomic environment,” he said. “You are going to gain back the zeros you eliminated.”