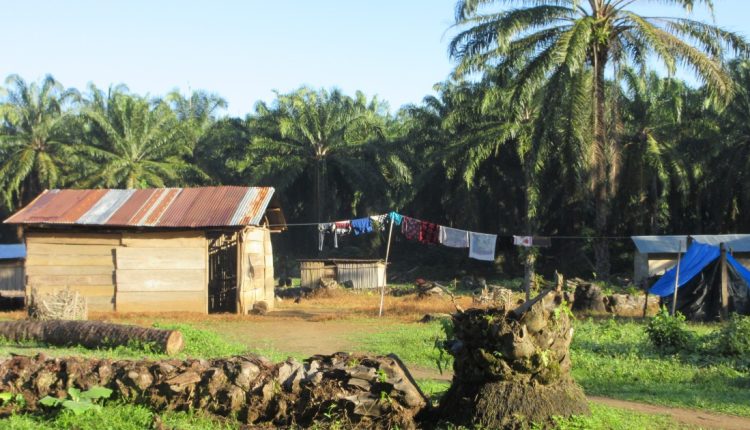 Chinebal, Guatemala – Anibal Agurtia blows into the conch shell tied to a red string around his hand, calling people to the clearing.

Already, a few dozen members of the Indigenous Maya Q’eqchi’ community of Chinebal have gathered to discuss an escalating land struggle in this remote area of ​​eastern Guatemala.

Community members accused a Guatemalan company of planting oil palm on their traditional lands, and they have built homes to reclaim the disputed tract – spurring an eviction notice, several police operations, and a day of deadly violence that remains ever-present in the memory of the settlement’s more than 500 residents.

“[Police] just killed him and took him away,” Matile Ac told Al Jazeera about her husband, Jose Chaman, who was killed last year during a police operation related to the conflict with the palm oil company, NaturAceites. “I want it to be investigated.”

The global palm oil market is dominated by Indonesia and Malaysia, which together produce more than 80 percent of the world’s supply. In Latin America, though, Guatemala is second only to Colombia – and it is the world’s sixth top producer.

Last year, Guatemala produced some 880,000 tons of crude palm oil. Roughly 80 percent of it is exported, mainly to Mexico, a few European countries, and other Central American nations. Palm oil and its derived ingredients are commonly found in processed foods, cosmetics, and cleaning products.

Oil palm in Guatemala is concentrated in the north, northeast, and the Pacific slope region. Plantations cover more than 1,800sq km (695sq miles), nearly 2.5 percent of the country’s arable land. In the Izabal department, which is home to Chinebal, they cover nine percent of arable land.

“The expansion of [oil] palm is dispossessing communities of their lands,” said Marcelo Sabuc, the national coordinator of the CCDA, a rural development and land rights movement organisation. “It is also causing environmental destruction,” Sabuc told Al Jazeera.

There have been sporadic mass die-offs of fish in rivers downstream from palm oil company facilities in recent years, Sabuc noted.

Investigations into a 2015 mass fish die-off indicated the likely suffocated fish, and the US Environmental Protection Agency noted potential negative impacts of “unauthorized discharges of anaerobic wastewater/sludge into the river watershed by a palm oil processing company”. A judge ordered a six-month closure of the facility for criminal investigation but the case stalled before charges were ever filed.

Roughly 40 percent of Guatemala’s population of more than 17 million is Indigenous and oil palm plantations in the north and northeast overlap with Maya Q’eqchi’ territory. Centuries of dispossession, a 1960-1996 civil war, mining and agroindustry have all contributed to displacement and longstanding land conflicts.

“The issue of agrarian conflicts in Guatemala is a historical problem that affects diverse actors, beyond any specific sector,” said Karen Rosales, executive director of the Association of Palm Growers of Guatemala (GREPALMA), which includes NaturAceites.

“One of the principal causes has been the institutional weakness of the State to address the legal certainty of land and to guarantee the human rights of citizens. This absence of the State definitely generates conditions for conflicts,” Rosales told Al Jazeera in an extensive written response to a series of questions.

Private sector groups often accuse people of invading private estates and lands used by agro-industry and natural resource companies, while Indigenous communities argue that they are reclaiming their traditional lands. There are hundreds of conflicts over lands and natural resources around the country.

The established village of Chinebal sits in the foothills of the Sierra de las Minas mountain range, 280km (174 miles) northeast of Guatemala City. Heavy rains occasionally wash out dirt road access to the community and the adjacent disputed land. That was the case when Al Jazeera visited, traveling by boat across Lake Izabal and then 20km (12 miles) by motorcycle along the dirt road through NaturAceites plantations.

“All of this was lands our grandparents farmed,” Juan Perez, Chinebal’s auxiliary mayor, said of the disputed land, which stretches a few square kilometers. “This piece of land belongs to us.”

NaturAceites, one of Guatemala’s top palm companies, claims ownership of the land under dispute and had planted it with oil palm. Maya Q’eqchi’ residents claim it historically belongs to Chinebal.

With no land to farm or build a home, some Chinebal residents moved onto the contested land, clearing parts of the plantation. Close to 100 families now live there in simple wooden homes spaced out in a patchwork of fallen and standing palms, maize and other subsistence crops.

Tension has grown over the years. Residents in the area’s communities – especially leaders – who have land conflicts with NaturAceites have been subject to arrest warrants and prosecution for related crimes, including usurpation and incitement. Perez, the auxiliary mayor, was arrested in October of last year.

The community managed to gather the $2,580 he needed for bail, but while he was detained, people blocked NaturAceites vehicles from transiting along the road past the area of ​​the disputed land.

On October 31, hundreds of police arrived. They fired tear gas and live ammunition, Maya Q’eqchi’ residents told Al Jazeera. People scattered and many hid out in the mountains for a few days before returning home. Community members say Jose Chaman was unarmed when he was fatally shot by police.

Nearly a year after Chaman was killed, authorities have yet to clarify exactly what happened.

One local leader, who requested anonymity due to fear of pending prosecution, told Al Jazeera a few community members had guns and had fired some warning shots into the air, not at police. He said nearly everyone was unarmed.

Another man who requested his name not be used for security reasons said he was unarmed and running away when police shot him in the back. The entry and exit wounds on the back and front of his right shoulder have scarred over, but the impacts on his health continue.

“I still cannot walk or talk much,” he told Al Jazeera earlier this year, briefly sitting up in bed. “At night I do not sleep because of the pain.” He did not seek out medical attention because he said he was afraid that he would be arrested if he left Chinebal.

That fear is widespread among those living in the disputed land, said community leaders. Ac and other women also told Al Jazeera police took belongings and food from their homes.

But in a public statement on October 31, the national police force (PNC) said that “agents were attacked by local people with firearms”.

“As a result, three PNC agents were wounded by firearm projectiles and one armed person ended up dead,” the statement read. National police spokesperson Edwin Monroy initially acknowledged receipt of Al Jazeera’s questions, but did not respond to repeated requests for comment over a period of several weeks.

NaturAceites was not involved in any proceedings related to October 31, a company representative told Al Jazeera in a written response to questions. But the company took legal action and a judge ordered the eviction of inhabitants from the disputed land.

Hundreds of police officers arrived in July and on October 6 to try to carry out the eviction. They suspended operations both times for security reasons, noting some locals in the area were carrying things.

“NaturAceites has a conflict resolution policy that prioritises dialogue and mediation with public institutions,” the company representative wrote. “Part of that policy commits us to bring cases before the judicial system as a last resort.”

The company says it maintains open and constructive communication with Chinebal and is assisting the established village with land rights regularization. “The only disagreement in the area is with a group of people who illegally usurped property owned by NaturAceites,” the representative said, referring to the people who have built homes on the disputed land.

GREPALMA’s Rosales also said the association’s members, which include NaturAceites, have voluntarily adopted human rights, labor, environmental and sustainability policies. She noted that nearly two-thirds of all palm oil produced in Guatemala is certified as sustainable by international initiatives such as the Roundtable on Sustainable Palm Oil (RPSO), a palm oil industry group.

But global environmentalist groups have argued that RPSO certification is essentially meaningless in practice. Around the world, the industry has been linked to environmental destruction, labor rights abuses, and killings of environmentalists and community leaders.

The Secretariat of Agrarian Affairs kept track of hundreds of land conflicts around the country and was involved in dialogue and mediation efforts, including in Chinebal. The government body was established as an executive branch secretariat in 2002, in part to fulfil presidential commitments related to agrarian affairs set out in peace accords that ended the 1960-1996 civil war.

The new commission, COPADEH, took a long time to get off the ground but has opened 13 of its planned 16 regional offices this year, including one inaugurated in August in Puerto Barrios, capital of the Izabal department. Attention to conflicts is one of the commission’s five directorates and it has begun engaging in multisectorial meetings and dialogue to address agrarian conflicts, including in Izabal.

But in the meantime, the situation in Chinebal remains tense, as the court-ordered eviction is still pending and could be carried out at any time. Police operations have struck fear in many community members, but Chaman’s killing has also sparked anger and determination.

“My husband died for the land,” said Ac, his widow, who was among several residents who said they would not back down. “I am not leaving here. If the police come, they will have to kill us all.”