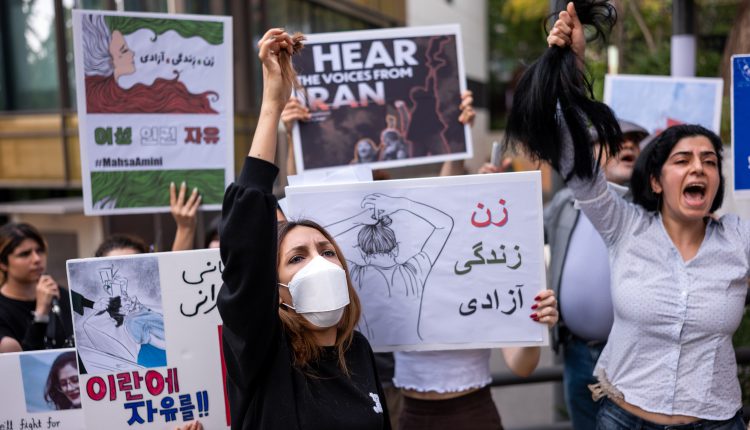 Iran on Friday denied reports that its security forces killed a 16-year-old girl by striking her with batons amid nationwide protests and claimed instead she committed suicide by falling off a roof.

Protests over the death of 22-year-old Mahsa Amini last month received renewed vigor this week following allegations on social media that Sarina Esmaeilzadeh was killed by security forces when she was struck on the head with batons, Reuters reported.

However, one chief justice of the Alborz province, where Esmaeilzadeh died last month, reportedly said a preliminary investigation showed her death was caused by suicide after falling from five-story building.

A member of the Iranian community in Seoul shout slogans after cuts her hair outside the Embassy of the Islamic Republic of Iran during a rally to defend women’s rights in Iran on Sept. 28, 2022, in Seoul, South Korea.
(Photo by Chris Jung/NurPhoto via Getty Images)

US SLAPS TOP IRANIAN OFFICIALS WITH SANCTIONS OVER CENSORSHIP, VIOLENCE AGAINST PROTESTERS

“Based on her mother’s account, Esmaeilzadeh had a history of suicide attempts,” he added.

However, Esmaeilzadeh’s death is not the only one Iran has claimed was caused by falling from a roof since protests against the regime began.

The mother of Nika Shakarami, 17, who disappeared in Tehran on September 20 after she was followed by security forces for burning her headscarf in protest, spoke out Thursday and accused Tehran of murdering her daughter.

An Iranian female protester chants slogans as she cuts her hair during a rally against the death of Iranian Mahsa Amini outside the Embassy of the Islamic Republic of Iran in Seoul, South Korea, Sept. 9, 2022.
(Photo by Chris Jung/NurPhoto via Getty Images)

Iran’s police chief, Gen. Hossein Ashtari, claimed earlier this week the teen had gone to a building “and fell from the upper floor at a time of gatherings.”

“The fall from that height led to her death,” he added.

Speaking to Radio Farda, the Persian-language arm of the U.S.-funded station Radio Free Europe, and the BBC Thursday, the bereaved mother countered Tehran’s claims and said she was murdered.

The mother claimed Nika’s body was intact and noted that some of her teeth, bones in her face and part of the back of her skull were broken.

“The damage was to her head,” she said. “Her body was intact, arms and legs.”

Shakarami’s death was reportedly kept secret by Iranian authorities for at least nine days before her body was seized from the morgue and buried in a remote area against her family’s wishes.

A man with a photograph of Iranian woman Nika Shakarami, during the demonstration in Naples for the freedom of Iranian women, after the recent riots in Iran and the killing of Mahsa Amini.
(Marco Cantile/LightRocket via Getty Images)

Amnesty International said in a report this week that at least 66 people have been killed by Iran’s security forces since protests broke out a month ago.

Amini, the 22-year-old who sparked the massive protests, was also reportedly killed after she was tortured and severely beaten by Iran’s security forces.