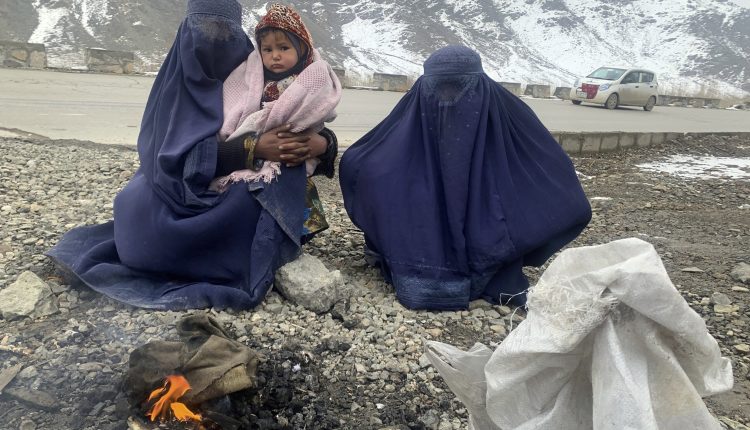 A flickering flame of paper, rags and random twigs is the only heat Gulnaz has to keep her 18-month-old son warm, barely visible beneath his icy blanket as she begs on a bitterly cold highway on the road to Kabul.

The 70-kilometer (45-mile) stretch of highway is flanked by snow-swept hills. Occasionally a driver slows his car and shoves an Afghani note into the 28-year-old woman’s bare, dirt-caked hand. She sits for hours on the highway median, positioned just beyond a bump in the road that slows traffic.

Her 16-year-old sister, Khalida, sits nearby. Both are hidden behind encompassing blue burqas. By the end of the day, Gulnaz, who gave just the one name, says they might make 300 Afghanis ($2.85). But most days it is less.

The Taliban’s sweep to power in Afghanistan in August drove billions of dollars in international assistance out of the country and sent an already dirt-poor nation, ravaged by war, drought and floods, spiraling toward a humanitarian catastrophe.

But in recent weeks it is the bitter winter cold that is devastating the most vulnerable and has international aid organizations scrambling to save millions from starving or freezing because they have neither food nor fuel. For the poorest the only heat or means of cooking is with the coal or wood they can scrounge from the snowy streets or that they receive from aid groups.

“The extent of the problem now in Afghanistan for people is dire,” said Shelley Thakral, spokeswoman for the World Food Program in Afghanistan. “We’re calling this a race against time. We need to get to families in very difficult, hard to reach areas. It’s winter, it’s cold, the snow.”

The cost of the humanitarian effort is staggering. Thakral said the WFP alone will need $2.6 billion this year.

“Break that number down. That’s $220 million a month, that’s 30 cents per person per day, and that’s what we’re asking for. . . . We need the money because we need to reach people as quickly as we can,” she said.

Earlier this month the United Nations launched its largest single country appeal for more than $5 billion to help a devastated Afghanistan.

It’s estimated that roughly 90 percent of Afghanistan’s 38 million people are dependent on aid and the U.N. says nearly 3 million are displaced in their own country, driven from their homes by drought, war and famine.

In 2020 alone, 700,000 Afghans became displaced, many living in desperate conditions on the outskirts of cities, in parks and open spaces, wherever they could erect a makeshift shelter.

Gulnaz migrated to central Logar province from the northern province of Kunduz, where her husband had been a shoemaker. But his work dried up with war and the coming of the Taliban and “we have come here,” she said as she sat with her sister on the side of the highway linking Logar’s capital, Pul-e-Alam, with Kabul.

“We have no heat at home and every day whether it is raining or snowing we come and sit here,” she said.

In Pul-e-Alam, where temperatures in January and February can drop to lows of minus-16 degrees Celsius (3 degrees Fahrenheit), thousands of men and women line up in the bitter cold to collect a World Food Program ration of flour, oil, salt and lentils.

The WFP surveyed the city for the neediest, giving each a voucher to collect their rations, but word spread quickly through the snow- and mud-covered streets that food was being distributed and soon scores of men and women pushed and pleaded for rations. Fights broke out among some in the crowd and security forces tried to cordon those without vouchers off to one side.

Each day for a week this month the WFP distributed rations to as many as 500 families a day, said Hussain Andisha, who manages the distribution. Most people in Logar province are desperate, he said.

As he spoke, four women in burqas slipped past the men at the gate taking vouchers. None had a ration card, but they pleaded for food. One woman, who gave her name only as Sadarat, said her husband was a drug addict — a devastating problem that has mushroomed in the past two decades, with as many as 1 million people, or 8% of Afghanistan’s population, counted as addicts, according to the U.N. Afghanistan produces over 4,000 tons annually of opium. the raw material used to make heroin.

“I don’t know where he is. I have no food for my children. Please I need something,” she said.

Like hundreds of thousands of Afghans, poverty and conflict drove Sadarat and her five children from their rural home in Logar province’s Charkh district to the capital, 38 kilometers (24 miles) away.

Shouting from behind Sadarat, another women, Riza Gul, said she has 10 children and a husband who earns less than $1 a day as a laborer on the days he can find work.

“What can we do? Where can we go?” she pleaded.

Andisha said the January distribution would provide staples to 2,250 families in Pul-e-Alam, the capital of roughly 23,000 people. Already the WFP has surveyed the seven districts of Logar province and begun distribution in four. Roads are deep in snow and passage for the hundreds of trucks transporting the food is slow going and can be treacherous.

Andisha said the need is desperate and gets worse with each passing day.

“Even from the first day we arrived here, the situation has worsened. People have no jobs,” he said, adding that women who were working before the Taliban took power “now cannot work in government departments.”

“It is certain the situation will worsen,” he said.

The Taliban administration in Logar has not interfered in the WFP aid work, Andisha added, and has provided security at distribution sites.

Thakral, the WFP spokeswoman, said donor contributions go directly to the people, even as aid organizations and the international community struggle to address one of the world’s worst humanitarian disasters without dealing directly with Afghanistan’s Taliban rulers.

“People come first and that’s important to remember in this humanitarian crisis,” she said. “We work independently from the de facto government so the assurance there is that any donation received will be given directly to the people.”