France to the West: War has its limits 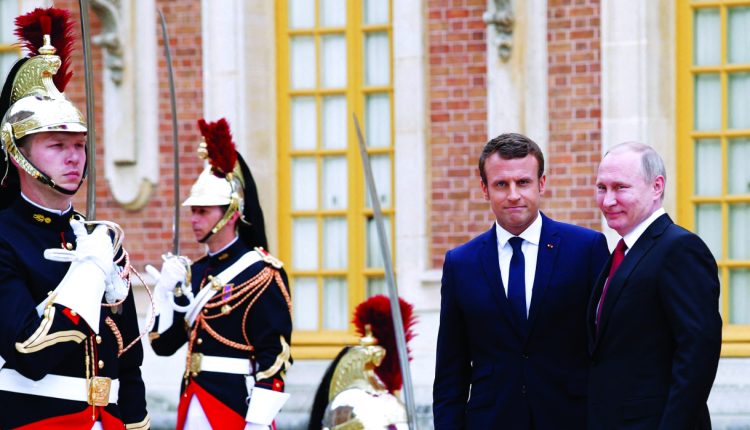 Last week, French President Emmanuel Macron outlined clearer features of the French approach to the war in Ukraine, by adopting an approach that does not contradict the Western endeavor to weaken Russia and enable Ukraine to defend itself. Defeat in Russia, or what Macron called the policy of “humiliating Russia.” Can France move forward in this direction?

Since the start of the war in Ukraine, attention has turned to the cautious German position, as Berlin had a different approach from the approaches of the United States, Britain and Ukraine towards Russia, while the French position was not focused on, given that the prevailing belief is that Paris is “guaranteed” to adopt the hard-line Western position within North Atlantic Treaty Organization (NATO).

The great pressure on Germany from its Western allies led to the budge of its first approach, which was focused on not burning bridges with Russia and keeping the atmosphere of war away from Europe through a position that does not avoid condemning Russia but also does not call for overriding Europe’s main priority, which is protecting Ukraine, without seeking to destroy Russia.

With the German position shaken by internal and external pressures, the unique French position emerged with a sharp alignment behind the United States. French President Emmanuel Macron, in a statement on May 9, showed a new tone in the European discourse toward the war. And before the French elections in which Macron won a second presidential term, many observers believed that the soft speech of the French president towards Russia was due to the electoral atmosphere and the internal situation. However, Macron frankly called for no solution in Ukraine that would lead to “the humiliation of Russia.”

“Tomorrow we will have peace to build, let us never forget that,” he said at a press conference in the European Parliament. We will have to do it with Ukraine and Russia at the table…but it will not happen by rejecting or excluding each other, not even by humiliation.”

The French position did not start from Macron’s last statement. After his victory in the elections, Macron received a phone call from the Russian president, who congratulated him on his victory. While it was not previously suggested that there would be European mediating countries in the conflict between Ukraine and Russia, successive signals were issued from the Elysee to play this role. In his telephone conversation with the Russian President, the French President affirmed his readiness to contribute to reaching agreements for peace in Ukraine.

“The French president expressed his readiness to help create conditions for a negotiated solution that guarantees peace, as well as full respect for Ukraine’s sovereignty and territorial integrity,” the Elysee Palace said in a statement after the phone conversation. French media announced that the phone call between the French president and his Russian counterpart lasted more than two hours.

In his inaugural address for a second term, Emmanuel Macron pledged to “move relentlessly” for France and Europe, and to “build a new European peace and new independence on our continent.” The discourse of independence is a feature that the French focus on in Europe more than any other country. It seems that the endeavors of this independence suffered a blow with the outbreak of the war in Ukraine, where Paris was leading Europe in building a European deterrent force independent of NATO, and the pace of formation of this force was supposed to accelerate if it were not for the Ukrainian war, which made all countries return to taking cover under the available umbrella. , which is NATO.

At the beginning of the Ukrainian war, the French position was close to the American position. The two countries, through their officials, made similar statements about a package of goals centered on protecting Ukraine’s unity and independence, and “weakening Russia.” However, successive statements by US President Joe Biden moved the US official position to another level. There was talk of “Russia’s defeat” and “regime change” on the agenda, describing Putin as a murderer and genocide in Ukraine. Macron refused to go along with the US position on Putin, and refused to use descriptions that offend the Russian president.

Professor of International Relations at the French University, Tawfiq Iclimandos, explains the dimensions of the French position, explaining that “French statements, which tend in favor of good relations with Russia, are faced on the ground by a different position, represented in providing military aid to Kiev, as well as participating in European sanctions against Russia.”

At the same time, he points out that Macron’s position on Russia has been consistent since he took office. The French president believes that “the United States is an unreliable party (while President Trump was in power) and that a great effort must be made to prevent the establishment of a Sino-Russian alliance. Hence the relations between Macron and Putin. This is a personal position of Macron, which is opposed by most of the French elite.”

He adds: There are many justifications that Macron adopts in this context, including that he benefits from the English economist George Keynes’ reading of the Versailles Conference (which ended World War I), as Keynes believed that France exaggerated the insult and punishment of Germany, which contributed to Then at the outbreak of World War II. Macron uses this approach to avoid the mistakes of Versailles and does not want to offend Russia.

Russia will not disappear

General Burkhard, Chief of Staff of the French Army, is the most visible in distinguishing the French position from the Western Allies. In an interview with the New York Times and Agence France-Presse, during a visit to Estonia last week, Burkhard firmly defined, “The interest of European countries is to weaken Russia.” In the words of the New York Times correspondent in Paris, Constant Mihout, the French general’s words seemed for a moment mirroring those of US Defense Secretary Lloyd Austin.

But in line with Macron to maintain an open diplomatic line with his Russian counterpart, General Burkhard added that weakening Russia does not mean eliminating it, and that the West may need to work with Russia to build a “global security architecture” in the future.

Distinguishing the French position from the British and the American, is not very dissonant. There is a fine line, but it is essential. General Burkhard wants the West to take advantage of Russia’s faltering control of Ukraine, adding that European countries need to untie Moscow’s “spider web” around Europe. But General Burkhard said that whatever the outcome of the war, “Russia will not disappear” and would have to be taken into account in future talks on European security.

Notably, unlike other European countries, France has refrained from sending large quantities of arms to Ukraine, an indication of its desire not to escalate tensions, but also for its limited stockpiles and production capabilities. France said last week it had sent 100 million euros worth of military equipment so far. This is lower than Estonia and Germany, which had offered $220 million and $140 million in arms, respectively, as of May 9, according to a database compiled by the Kiel Institute for the World Economy, a German think tank.

Writer and researcher in European affairs, Nizar Jaladi, said in statements to Al-Bayan that there is no doubt that Macron has played the role of the first interlocutor with Putin since the outbreak of the crisis in Ukraine, in two capacities. The first is that Paris chairs the Council of the European Union for six months, and the second is that it is a nuclear state and a member of the UN Security Council.

He points out that the French foreign policy is the policy of the two criteria; On the one hand, Paris supports Ukrainian refugees and supports US efforts in the proxy war and arms push in Ukraine, and on the other it seeks to advance dialogue.

Al-Jalidi believes that “Macron before the elections is not Macron after.” These are the elections in which he was embarrassed because of France’s positions and which he exploited at the same time. He is now aware of the extent of popular embarrassment in light of his close and subordination to America and the money that France pumps – which is unable to restore its economy – to NATO from For aid and for Europe, as he described it.

The writer and researcher in European affairs stresses that the costs of this link embarrass the French president at home, while he is on the eve of legislative elections whose first slogan is the purchasing power of the French, and its second slogan is where France’s money goes for Europe in light of the economic situation of the French, and therefore Macron is in the orbit of the forbidden The politician now uses the two standards he uses, as he put it.

In the end, France’s ability to move midway between the West and Russia, without alignment with the United States and NATO countries, remains limited; Especially in light of the fact that Germany was forced to retreat from its cautious positions at the beginning of the war in Ukraine. It is expected that France will be subjected to Western pressure to join the sharp path in supporting Ukraine and arming the Ukrainian forces.