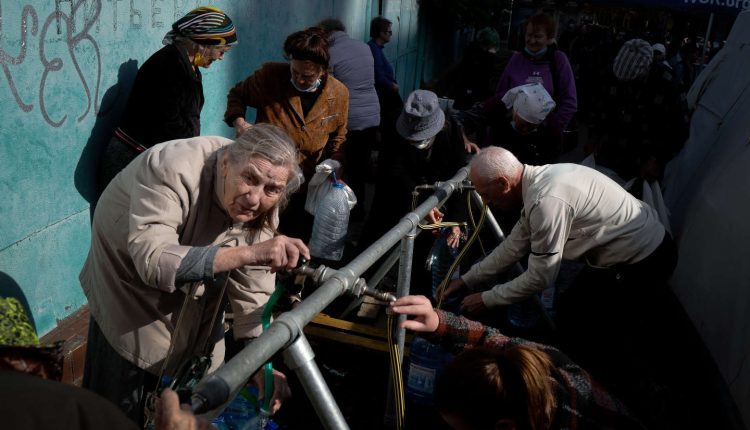 “We are preparing for the worst and hoping for the best. » The saying, released with a shy smile by a volunteer of the Ukrainian Red Cross, Evgen Tchupina, is in the image of the population remaining in Mykolaiv. This Monday, September 26, in front of the organization’s central office, hundreds of people are waiting to collect drinking water and humanitarian aid from the NGO World Central Kitchen. The Red Cross also provides food, medicine and warm clothing. Evgen Tchupina has no plans to leave: “I want to help people and I will be much more useful here. »

For more than seven months, the town located a few tens of kilometers from the front line has been living under almost daily bombardments. Oleksandr Senkevych, the mayor, count “135” killed and “665 seriously injured” in Russian strikes. Hundreds of houses and apartments were destroyed. “We don’t know what path the war will take and how long it will last, declares the chosen one on the telephone from kyiv. But for now, our priority is the people who stayed. »

Authorities are advising residents to leave Mykolaiv to “save their lives”. Between 200,000 and 230,000 people out of a peacetime population of around 500,000 still live in the city. For those, it is recommended to always be ready to flee in case of bombardments on the boiler rooms because winter and its negative temperatures are approaching.

Read also: Article reserved for our subscribers South of Mykolaiv, a unit in the positional war: “We started at a distance of 4 km, then 3 km, then 2 km, 1.5 km”

The city is preparing for the start of the district heating season ” like every year “, Explain Oleksandr Senkevych, who ensures that “everything is operational. The only thing that could happen is bombings that would destroy our infrastructure, such as boiler rooms…” The risk is real. The city is in contact with the Danish Ministry for Development Cooperation, which has agreed to provide three mobile boiler rooms in Mykolaiv. “We will be able to use them temporarily, the time to repair ours”, warns the mayor.

In the same vein, the Danish ministry has undertaken to send plywood panels to cover the windows shattered by the blast of the explosions. The panes are terribly lacking, everywhere in the country. Many windows in Mykolaiv are covered with the means at hand: plastic sheeting and wooden planks…

The city has sufficient gas reserves. Electricity, except in the villages close to the front line and the area occupied by the Russian forces of Kherson, continues to work. “We have problems after each bombardment but we fix each time. » Besides, if the boiler rooms were to be destroyed, “People will still be able to use their electric heaters, if they have them. We are not worried because half of them have left Mykolaiv and therefore the electrical system is not overloaded”, assures the aedile.

You have 56.34% of this article left to read. The following is for subscribers only.