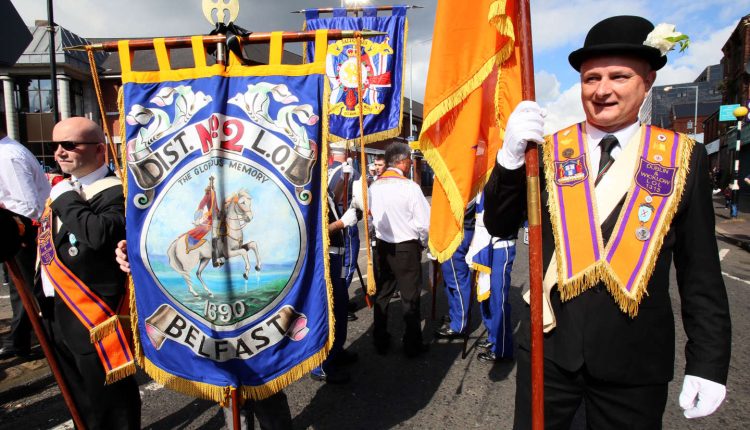 NarrativeEvery year, from March to October, Protestant organizations – loyal to the British crown – organize thousands of highly symbolic marches across the province. At the risk, in certain districts, of seeing the most radical stir up tensions with the Catholics.

The police car has just pulled up on the main thoroughfare of Sandy Row near the heart of Belfast. On the sidewalk, a seller of British flags finishes setting up his stall. The men gather, the girls are heavily made up, the children excited, the parade can begin. This evening in June, around twenty brass bands – the South Belfast Protestant Boys, the East Belfast Protestant Boys, the Dunmurry Protestant Boys… – will march through this district famous for having been one of the epicentres of the conflict which opposed until 1998 Protestant communities (or Loyalists/Unionists, loyal to Northern Ireland’s membership of the United Kingdom) to Catholics, mostly Republicans, in favor of reunification with the south of the island.

Kids lead the way, playing with tricolor sticks. The standard bearers, the fifes, the drummers and the player of lambeg drum, a kind of bass drum. If the outfits are of military inspiration – braided caps, fitted jackets – the atmosphere is family, festive and very alcoholic. The parade may take place a stone’s throw from the city center, but it only attracts locals: twenty-four years after the Good Friday peace treaty, Belfast remains divided between Catholic and Protestant “ghettos”.

About 4,000 such parades are held each year in Northern Ireland, from March to October. For the most part organized by the Protestant community, they borrow from the religious procession, the military parade, even the carnival and political demonstrations. Thus it is not uncommon to see “anti-protocol” banners there, this part of the Brexit treaty negotiated between London and the European Union establishing a customs border between the province and Great Britain, which most unionists denounce.

The marching season culminates on July 12 with the Twelfth, the commemoration of the Battle of the Boyne (1690), which saw the Protestant English King William III of Orange defeating James II the Catholic. Another highlight is the second Saturday in August, with a parade through the walled city of Derry (Londonderry, for Protestants), in remembrance, once again, of a distant Protestant victory.

“We will not surrender”

These parades remain essential components of Protestant identity, but they are also sources of friction with Catholics, who consider them backward-looking, even provocative. This summer is no exception: after two years without parades due to the Covid-19 pandemic, the entry into force of the famous protocol, and the success of the pro-reunification party Sinn Fein in the local elections in May, the authorities of the province fear overflows.

You have 76.23% of this article left to read. The following is for subscribers only.