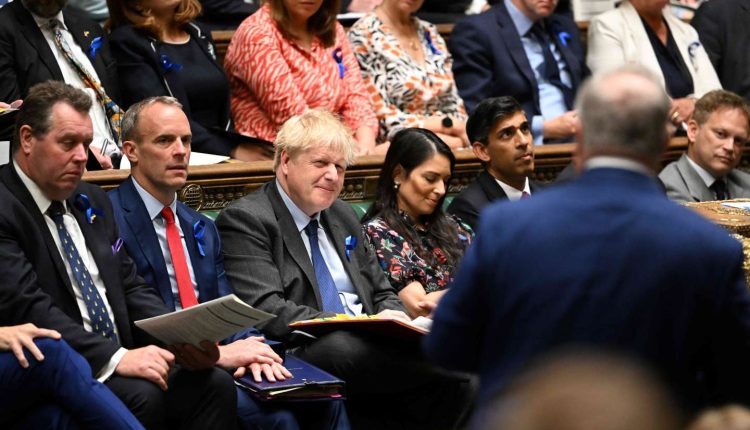 The conservatives, in power, suffered two heavy defeats in partial parliamentary elections on Friday, June 24. “We cannot continue as if nothing had happened”, decided the chairman of the Conservative Party, Oliver Dowden, announcing his resignation shortly after these results.

These defeats “are the latest in a series of very bad results for our party”Mr Dowden wrote in a letter to Prime Minister Boris Johnson, adding that “someone has to take responsibility”.

My letter of resignation to the Prime Minister. https://t.co/xd5MtM2o3n

After elections held on Thursday, the centrist Liberal Democrats overthrew the Conservative majority to win Tiverton and Honiton, a constituency in South West England that has been conservative since its inception in 1997. The Labor Party, the main party of opposition, reclaimed the constituency of Wakefield in northern England, a traditionally Labor stronghold but snatched by the Tories in their December 2019 triumph.

These elections were organized after two resignations of former Conservative MPs. The Wakefield poll was triggered by the resignation of Imran Khan, sentenced to eighteen months in prison for the sexual assault of a teenager. In Tiverton and Honiton, 65-year-old MP Neil Parish tendered his resignation after admitting to watching pornography on his phone in Parliament.

In speeches hailing their victories, the two newly elected MPs said the UK had lost faith in Boris Johnson and urged him to step down.

Opposition Leader Keir Starmer, who plans to replace Mr Johnson as Prime Minister after the next general election due in 2024, claimed that Wakefield “could be the birthplace of the next Labor government”. “Wakefield has shown that the country has lost faith in the Tories”he said in a statement. “This result is a clear verdict for a Conservative Party that is running out of energy and ideas. »

Read also: Article reserved for our subscribers “Partygate”: Boris Johnson obtains the confidence of Conservative MPs, but comes out of the vote very weakened

Liberal Democrat leader Ed Davey said his party had entered “in political history with this stunning victory” and it was a “wake-up call for all those Tory MPs who support Boris Johnson”. “The people of Tiverton and Honiton spoke for the country”he added. “The public is fed up with Boris Johnson’s lies and law breaking, and it’s time Tory MPs finally do the right thing and fire him. »

Mr Johnson has spent months fighting for his survival after a series of controversies including ‘partygate’ – these evenings organized despite the containment measures – which has undermined his legitimacy as party leader. The prime minister ruled out on Thursday, while in Rwanda for a Commonwealth summit, resigning in the event of a defeat. But two weeks after surviving a vote of no confidence in the wake of “partygate”, these results risk accentuating the climate of distrust within the majority.

Even before the controversy erupted in December, the 58-year-old Brexit architect had lost two once secure seats in a by-election last year. He then scored very poorly in the local elections in May.

Weeks later, dozens of Tory MPs triggered a vote of no confidence in Mr Johnson, and more than 40% of them turned their backs on their ailing leader. The context is proving unfavorable for his government, with inflation at its highest for forty years – exceeding 9% – at the origin of a massive strike by railway workers, and the recent failure of a much criticized attempt to deport migrants to Rwanda.

Read also: Article reserved for our subscribers In the United Kingdom, the “cost of living crisis”

Mick Lynch, the trade unionist who bursts the British screens