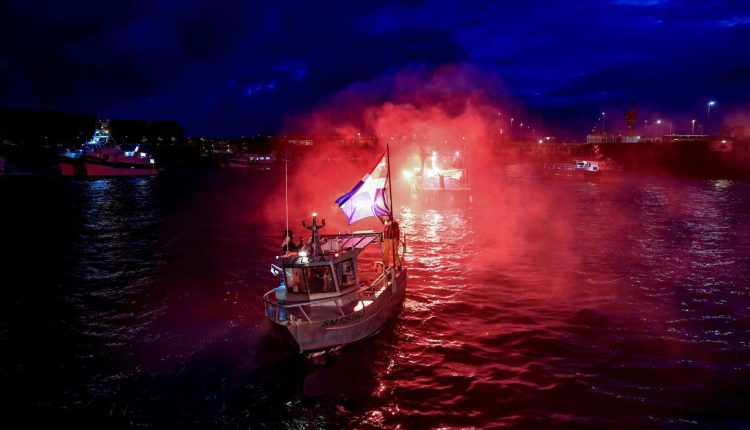 It is the epilogue of a diplomatic-commercial battle of more than a year between Paris and London, arbitrated by Brussels. France finally obtained 1,054 fishing licenses from the UK and the Channel Islands, allowing holders to continue fishing in their waters, as before Brexit. For the dozens of fishermen who have remained on the sidelines or whose activity has been drastically reduced, the government has planned a “individual support plan”or a fleet exit plan for ships that will be destroyed.

“It is not with lightness of heart that we accept a fleet exit plan, but we have been waiting for this order for months: finally, business leaders will be able to organize themselves, move forward”Hubert Carré, director general of the National Committee for Maritime Fisheries and Marine Farming, told Agence France-Presse.

Read the report: Article reserved for our subscribers Post-Brexit fishing licenses: the island of Jersey “is in the middle of a battle that goes beyond it”

“No destabilization of a fishing port”

The Secretary of State for the Sea, Hervé Berville, defended “a plan which does not lead to the destabilization of a fishing port or an auction and, therefore, which does not contribute to the weakening of our fishing capacity”, in a press release. This plan could concern more than a hundred ships distributed between Brittany, Normandy and Hauts-de-France.

The conflict escalated in 2021, with London going so far as to send two patrol boats off Jersey, while Paris threatened to cut power to the Channel Islands.

According the decree published in Official newspaper Thursday, any vessel subject to a request for aid must have carried out fishing activities for at least 90 days a year during the last two years preceding the year of the date of submission of the request. The ship must be “entered the fleet before 1er January 2021 » and meet at least one of the following conditions: justify a dependency of at least 20% of the total value of sales of its catches made during the reference year 2019 or 2020 in British waters, Jersey or Guernsey; not hold a fishing license giving access to the British 6-12 mile zone or the Channel Islands and justify a prior activity in this zone; have a dependency on one or more specific fish stocks, generating at least 20% of the turnover.

November 18, deadline for submitting an application

The overall envelope of the device is currently 60 million euros, financed by the European Commission. The amount of aid is calculated for each vessel according to its power, and the beneficiary is prohibited from fitting out a new vessel or increasing its fishing capacity. “during the five years following the payment of the aid”.

This prohibition “is an additional constraint”, regretted Mr. Carré. For the national committee, the renewal of the aging French fleet requires the fitting out of more modern, more comfortable and quieter ships, and therefore more powerful.

The fishermen had proposed the principle of a stock exchange, to scrap the oldest boats and keep the most modern, but this was not accepted, in particular because the gauges and fishing capacities of the outgoing vessels and those of the beneficiary vessels would not have corresponded.

Fishing masters have until November 18 to submit a request for assistance.

Concerns for the future

If their application is accepted, they undertake to take their vessel out of the fleet within ninety calendar days.

“Beyond This Plan”Hervé Berville mentioned ways to support the sector, for example “a fund for the decarbonisation of fishing vessels”.

Fishermen are not really done worrying about the consequences of Brexit: they fear being imposed new technical modalities (types of nets, quotas) associated with the new British licenses, and they already fear overfishing in French waters. from the summer of 2026, when European vessels will have to give up 25% of their catches in British waters.

In London, neighbors of the Tate Modern exposed to the view of visitors are…

In Calais, the bunker border with England pushes migrants back to the sea

In Scotland, controversy over the transfer of a transgender to a women’s prison

UK braces for biggest strike day in a decade

United Kingdom: Faced with social protest, the Sunak government is accused of wanting…