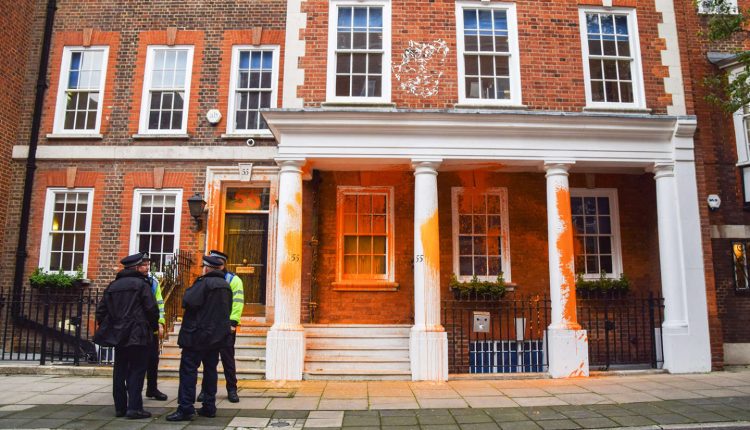 It is a discreet address in the heart of London, a few hundred meters from the Palace of Westminster and Downing Street, close to the headquarters of the Conservative Party or the very select Westminster School, a private school at 40,000 pounds sterling ( more than 46,000 euros) the year. In recent times, 55 Tufton Street, an elegant Georgian-style building (weathered bricks, white colonnades) has become the symbol of what the British right has produced at its worst in recent years: the lies of Brexit or the attempts to favor shamelessly the wealthiest.

At the end of October, climate activists from Just Stop Oil targeted it, and sprayed its facade with orange paint. The BBC and other major British media have looked into his activities and the band of Led By Donkeys, a London collective denouncing the abuses of the Tories, devoted a video to him that has gone viral.

At 55, Tufton Street is home to half a dozen ultra-conservative lobbying groups, including the TaxPayers’Alliance, Civitas, Migration Watch UK and the Global Warming Policy Foundation. The pro-Brexit organization Vote Leave, which coordinated the referendum campaign in 2016, was housed there for a few months. Leave Means Leave, another Eurosceptic pressure group, co-chaired by far-right politician Nigel Farage, had offices there until its dissolution in 2020. Also influential, the very liberal Center for Policy Studies is based at 57 , Tufton Street, in the adjoining building. The Institute of Economic Affairs is located at 2 Lord North Street, just around the corner.

A community of thought

Most of these think tanks claim to be “independent” and “non-partisan” but a simple visit to their website reveals their commonality of thought with the Conservative Party. The TaxPayers’Alliance invites “join the fight for the lowest taxes possible” and offers a number of studies on the weight of the British public debt or the salaries of the leaders of the country’s unions – clichés of Tory elected officials. Migration Watch UK denounces migration “massive” in the country, a constant preoccupation of the right. The Institute of Economic Affairs wants to ” promote ” the role of the market in society.

Barely known to the general public, very close to the Daily Telegraph and Spectator, pro-Tory newspapers, these think tanks are key animators of the debate on the right and the main incubators of ideas for the successive Conservative governments in Downing Street since 2010.

You have 52.77% of this article left to read. The following is for subscribers only.