U.S. pledges to ramp up supplies of natural gas to Britain as Biden and Sunak seek to cut off Russia 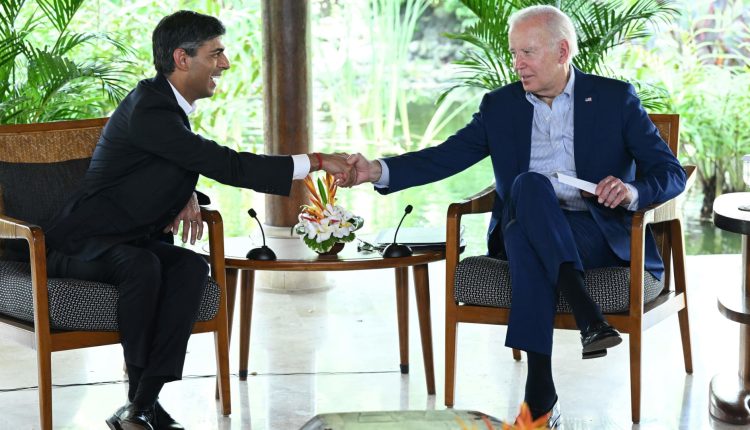 Rishi Sunak and Joe Biden photographed on the sidelines of the G20 Summit in Indonesia on Nov. 16, 2022.

LONDON — The U.K. and U.S. are forming a new energy partnership focused on boosting energy security and reducing prices.

In a statement Wednesday, the U.K. government said the new partnership would “drive work to reduce global dependence on Russian energy exports, stabilise energy markets and step up collaboration on energy efficiency, nuclear and renewables.”

The U.K.-U.S. Energy Security and Affordability Partnership, as it’s known, will be directed by a U.K.-U.S. Joint Action Group headed up by officials from both the White House and U.K. government.

Among other things, the group will undertake efforts to make sure the market ramps up supplies of liquefied natural gas from the U.S. to the U.K.

“As part of this, the US will strive to export at least 9-10 billion cubic metres of LNG over the next year via UK terminals, more than doubling the level exported in 2021 and capitalising on the UK’s leading import infrastructure,” Wednesday’s announcement said.

“The group will also work to reduce global reliance on Russian energy by driving efforts to increase energy efficiency and supporting the transition to clean energy, expediting the development of clean hydrogen globally and promoting civil nuclear as a secure use of energy,” it added.

Commenting on the plans, U.K. Prime Minister Rishi Sunak said: “We have the natural resources, industry and innovative thinking we need to create a better, freer system and accelerate the clean energy transition.”

“This partnership will bring down prices for British consumers and help end Europe’s dependence on Russian energy once and for all.”

The news comes at a time of huge disruption within global energy markets following Russia’s invasion of Ukraine in February.

The Kremlin was the biggest supplier of both natural gas and petroleum oils to the EU in 2021, according to Eurostat, but gas exports from Russia to the European Union have been signifciantly reduced this year. The U.K. left the EU on Jan. 31, 2020.

Major European economies have been trying to reduce their own consumption and shore up supplies from alternative sources for the colder months ahead — and beyond.

Top CEOs from the power industry have forecast that turbulence in energy markets is likely to persist for some time. “Things are extremely turbulent, as they have been the whole year, I would say,” Francesco Starace, the CEO of Italy’s Enel, told CNBC last month.

“The turbulence we’re going to have will remain — it might change a little bit, the pattern, but we’re looking at one or two years of extreme volatility in the energy markets,” Starace added.

In Greece, the government wants to prevent the resurgence of neo-Nazis from Golden…