Russian and Ukrainian exiles in France: “Nostalgia weighs on me so much that I have to return to Odessa” 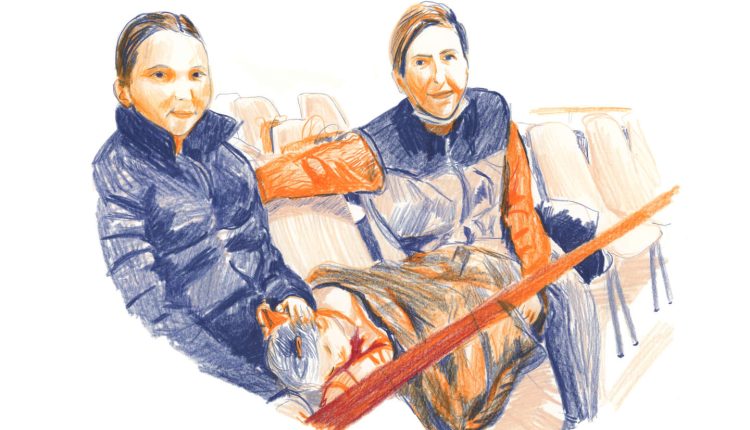 Testimonials“Carnets d’exil”, episode 11. With the war, they left Lviv, Odessa or Tcherkassy, ​​and put their suitcases in Courbevoie, Toulon or Cossé-le-Vivien, in Mayenne. For how long ? Twelve Ukrainian and Russian families have agreed to tell us about their daily lives and give us news over the weeks.

Their lives have been turned upside down by the conflict. Twelve Ukrainian and Russian families tell us about their new daily life in France over the weeks. Since our last exchanges, Veronika has left the holiday center which has been housing her with her daughters for two months to settle in a house in Cossé-le-Vivien, in Mayenne. Tamara is considering returning to Ukraine in August, unless the situation deteriorates. Khrystyna, who works, would like to find a studio in Paris and leave her host family in Courbevoie. Little Emilie, Nataliia’s daughter, took part in her school fair, in traditional Ukrainian dress.

In this series, “Carnets d’exil”, all the names are not published in order to protect the people who agreed to testify with the World.

Nearly 95,000 displaced Ukrainians benefit from the allowance for asylum seekers in France, according to the French Office for Immigration and Integration, as of June 29.

“I MOVED TWO DAYS AGO in a nice house, twenty minutes by bus from Laval, but we were told that it was temporary accommodation. I don’t know how long we will stay there. Then we will be relocated nearby. We moved in with another family, a retired couple and their 30-year-old daughter. It’s going well, but the uncertainty and again the waiting are difficult to live with.

I keep my spirits up, even if I cried one day when I left Ambrières-les-Vallées. In more than two months, we had got used to this place, we had even made French friends, we knew the employees of the supermarket. I was sad to leave them, but, here, it still seems better, it’s a little bigger city, and I have the impression that the buses pass more frequently. Well, it’s true that we haven’t seen much of it yet, it’s been raining for two days…

From Monday, Daria will go to kindergarten, right next door. Yesterday, we showed her around the school, and she was so happy that she didn’t want to go back. She should be the only Ukrainian student, I believe there are no other Ukrainians here. Anastasia won’t be able to go to school until September, because there’s only one week left in college. Until then, she should have French lessons twice a week, but it is not yet known when and where they will take place.

She started to learn on her own when we were in Ambrières-les-Vallées, thanks to a language program on her computer and by memorizing sentences. She has to make progress, we have no choice, to be able to enter 5e, but it should be fine. At the start of the school year, she will have to follow the courses at her Ukrainian school in parallel, so as not to fall behind in the programs before being able to follow all the lessons in French. In reality, I’m not sure how it will turn out, because if schools reopen in Kyiv, I don’t think online classes will be organized.

You have 72.79% of this article left to read. The following is for subscribers only.