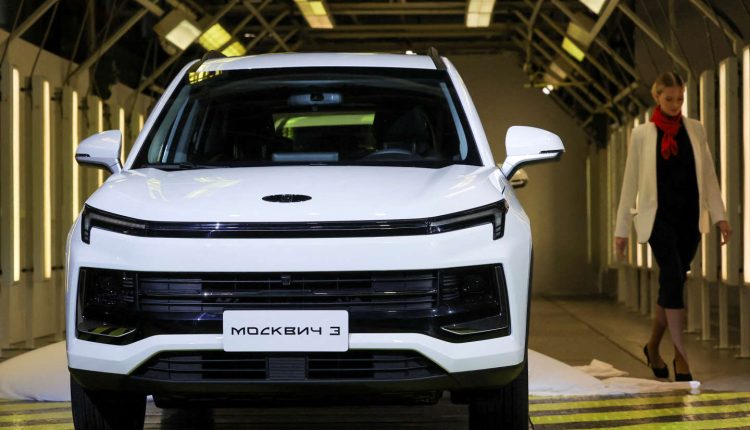 The mayor of Moscow, Sergei Sobyanin, had promised it in May: since the foreign firms were packing up, it was necessary to relaunch the “long and glorious history of the Russian automobile”. A few months later, the contract is fulfilled. On November 23, Mr. Sobyanin proudly held out the keys to the first Moskvitch 3, an urban crossover with a gasoline engine and a resolutely modern design.

What a symbol and what a snub for the mayor! This new generation Moskvitch (the name means “Muscovite” in Russian) comes off the production lines of the former Renault factory in the capital. In reaction to the invasion of Ukraine by Russia, the French firm had sold to the Russian State, in the spring, its majority stake in the car manufacturer Avtovaz. It had also sold its factory in the south of the city, now renamed “Moscow Automobile Plant Moskvich ».

The automotive industry is one of the most affected sectors of the country’s economy. Between the manufacturers who have chosen to leave, despite massive investments in the past, and those who can no longer supply their factories with spare parts, production fell by 96.7% in May compared to previous year – the fall was only 63.9% in October. Moscow even issued a decree authorizing the manufacture of cars without ABS or airbags.

The Moskvitch’s return is meant to illustrate Russia’s ability to transform its economy in a sustainable way – in other words, a political victory for Moscow. If the production expected in December caps at 600 units, the stated ambition is to release 100,000 cars per year, for some electric. The Citymobil taxi company has already expressed interest in 2,000 vehicles.

The symbol is all the more telling as Moskvitch is a mythical brand from the Soviet era. The capitalist world had Ford, the communist world, Moskvitch. In the bright future, every good family would have its own Moskvitch or Zhiguli – even if it meant saving for years and then waiting so long on a waiting list. The brand, which appeared in 1930, did not survive the end of the USSR: after years of decline, it was definitively declared bankrupt in 2006… and its factory taken over by Renault.

The resurrection is certainly gradual, but it is presented as a major success of Russian industry, which the “special operation” in Ukraine would have even made stronger. The news inspired the RIA agency with one of these dispatches of which it has the secret, fed only by anonymous comments on foreign news sites: “After restarting the Moskvitch plant, the Germans recognized the futility of sanctions. » “The Germans” being represented here by “MrEchoBravo”, commentator of an article in the Spiegelwhich ensures that the said penalties “only strengthen an efficiently and cohesively managed Russian economy”.

You have 45.72% of this article left to read. The following is for subscribers only.