In Italy, “we believed that the right to abort was acquired. We were wrong “ 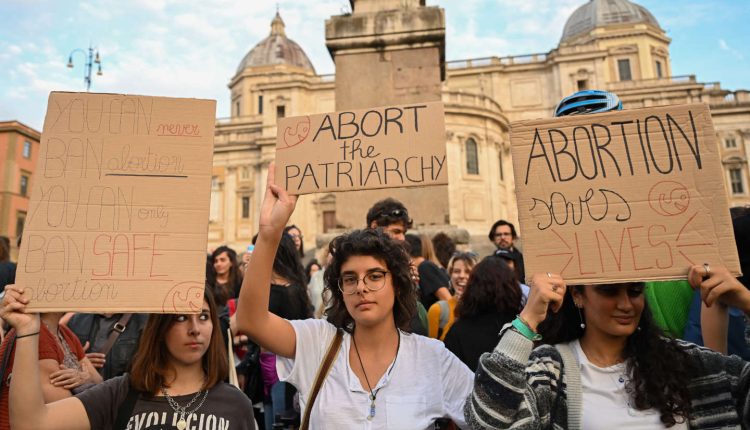 The sign is very simple, a simple piece of cardboard, but the words drawn in felt-tip pen seem from another era: “It’s my body, it’s me who decides. » Brandished by a very young girl, Wednesday September 28 in Rome, the panel nevertheless refers to a very real concern, in Italy today. Like the other demonstrators around her, men and especially women of all ages, the one who holds it above her head believes that the right to abortion is no longer really respected in her country.

With her, there were several hundred to demonstrate in the vicinity of the Basilica of Saint Mary Major, at the call of the feminist movement Non una di meno (“not one less”), federation of associations inspired by an Argentinian collective created to combat violence against women. Organized on the occasion of World Abortion Rights Day, this rally allowed participants to express their fears, three days after the victory of the very conservative Giorgia Meloni in the legislative and senatorial elections on September 25.

The president of the post-fascist party Fratelli d’Italia does not intend to question the 1978 law, which decriminalizes abortion in Italy. “But she says she wants to promote the right not to have an abortionalarmed Leona, a retired nurse. This is very worrying, because here it is the right to abort that is threatened, not the other way around. We believed, we feminists, that this right was acquired. We weren’t careful enough. We were wrong. »

In reality, access to abortion is becoming difficult in Italy, where nearly 70% of doctors likely to intervene in an abortion have signed a form giving them conscientious objector status. “In Catholic universities, they indoctrinate young graduates to make them sign this paper at the end of their course”says Emmanuele – he does not wish to give his name –, a second-year medical student at the Roman public university La Sapienza.

Read also Article reserved for our subscribers In Italy, 70% of doctors refuse to perform abortions

In some places, especially in very conservative areas, this percentage is even higher. “This is the case of Molise, in southern Italy, where it is 92%”, explains Milanese lawyer Giulia Crivellini, of the Free Abortion movement. According to figures collected by the Collettiva association, 72 hospitals in the Peninsula have an objection rate of between 80% and 100%, while 22 establishments have 100% signatories of the famous form.

You have 50.82% of this article left to read. The following is for subscribers only.