How Brussels conditioned the EU recovery plan on concrete objectives 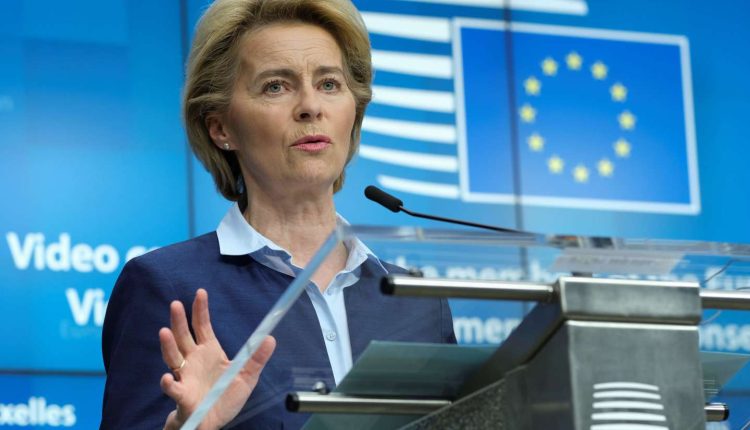 “European funds should serve as a carrot to initiate ambitious structural reforms that would normally not be carried out. » In the summer of 2020, when setting up the European recovery plan, for an unprecedented amount of more than 723 billion euros, several States – Austria in particular – pleaded for the payment of subsidies and loans be done under conditions. It is this line that prevailed: to receive its share, each country must justify to the European Commission that it has undertaken reforms and achieved specific objectives.

These conditions are meant to ensure that the plan delivers on its promises: to build a more economically and environmentally resilient Europe, while helping the most fragile countries to catch up. But a margin of interpretation remains. Commitments are more or less ambitious depending on the country, and not always kept.

Two and a half years after laying the groundwork for the plan, the European Commission finds itself faced with a dilemma. Should we demand strict application of the roadmap, even if it means freezing tens of billions of euros? Or compromise on the objectives, at the risk of reducing the expected effects of the economic stimulus? The European collective Recovery Filesinitiated by independent Dutch platform Follow the Money and which The world is a member, investigated these dealings.

723.8 billion euros: the recovery and resilience plan launched in 2021 is the largest sum ever released by the European Union. These loans and grants aim to revive the continent’s economy, shaken by the crisis caused by the Covid-19 pandemic, with the proclaimed objective of creating a Europe “greener” ” and “better adapted to current and future challenges”.

How was this plan developed? How will the money be spent? The Recovery Files Collectivewhose The world is a partner, has set itself the goal of investigating the many questions of public interest raised by the use of these colossal funds. This project, launched by the independent Dutch platform Follow the Money, brings together editorial staff from all over Europe, with the support of the fund IJ4EU (Investigative Journalism for Europe).

“Targets and milestones” not always ambitious

The objectives of the recovery plans submitted by the Member States are presented as “targets and milestones”, a term that brings together subsidy programs and reforms. Each payment request sent to Brussels must be accompanied by an inventory of the promises made, with supporting documents. In total, the European Commission will have to judge compliance with more than 5,000 “targets and milestones” by 2026, in parallel with the release of funds.

In the summer of 2021, France received a first tranche of subsidies of 5.1 billion euros after the validation of its plan, out of the 40 billion requested from Brussels. She then received a second payment of 7.4 billion euros on March 4, 2022, after having justified the fulfillment of its thirty-eight commitments for 2021. At the level of the Twenty-Seven, in January 2023, 94 of the 338 billion in planned subsidies were paid, as well as 45 of the 386 billion in loans.

Behind these figures, the ambition of the objectives is variable. This was also discussed during the negotiations prior to the launch of the recovery plan, in the summer of 2020. According to a 250-page document summarizing these negotiations, published by Brussels in response to a request for access to the administrative documents of Follow the Money, several States such as France, Cyprus or Hungary were in favor of including in the “targets and milestones” reforms already implemented. For Paris, it was necessary to prevent States from delaying certain reforms for the sole purpose of making them objectives of the plan.

This is why the reforms already carried out appear in the commitments of the recovery plan submitted by France in April 2021. For example, the new method of calculating personal housing assistance (APL) appears there, although it was put in place on 1er previous January.

At least seven member states have already implemented “commitments” in their plan. They represented, for example, 23 of the first 37 objectives of the German plan and half (13 out of 26) of the first commitments of the Dutch plan.

Another big trick: include in the national plans transpositions of European directives into national law or objectives linked to these European commitments, which should in principle have been adopted no matter what. This did not prevent at least eight countries (Bulgaria, Croatia, Cyprus, Italy, Lithuania, Romania, Slovakia and Spain) from taking advantage of it, according to our count. Rome has thus included in its plan an air pollution control program by the end of 2021. But this was already required of it by a European directive of 2016, to which Italy should have comply as of April 2019.

Crack down or compromise?

Other objectives, on the contrary, prove to be much more difficult. The German government has thus provided in its plan to invest 712 million euros to help research on vaccines against Covid-19. The objective was to have two vaccine candidates supported by this funding approved by the European Medicines Agency by the third quarter of 2021 at the latest. At the time, BioNTech had already had its own approved, but its German rival CureVac hoped to suggest a second. Except that the company abandoned its vaccine project at the end of 2021. A snub for CureVac, but also for Berlin: this objective not having been achieved, the European Commission is entitled to reduce the funds granted to Germany.

No clear rules have been erected at this stage to resolve situations of this type. Firstly because the requests for payment in Brussels do not necessarily correspond to the sums committed by the States – one can for example request a billion euros to finance actions which in reality cost 0.9 or 1.1 billion. Then because it can be understandable that all the targets of the plan are not reached. Result: the European Commission discusses on a case-by-case basis with the Member States.

The European Court of Auditors criticized this situation in a report published in September, and pleaded for a clear methodology for calculating payment reductions in the event of targets not being met, so that each State is treated fairly. Questioned by our Follow the Money partners, the Commission ensures that it is preparing a partial payment methodology that follows its recommendations, without giving a precise deadline.

The obstacle has, it seems, been avoided so far. Only eleven of the twenty-seven Member States have already received European funds linked to the achievement of their “targets and milestones”. Some are playing for time like Belgium, who must implement a pension reform to start receiving European credits. The French government has spared itself this pitfall: its pension reform project is mentioned in the recovery plan, but is not part of the formal commitments which condition the subsidies.

Poland and Hungary will also come under scrutiny, with both countries having to resolve crucial rule of law issues to unlock payments. But they are not the only ones. In December, Romania submitted a request for payment. Brussels will have to judge whether the 2019 whistleblower protection directive has been correctly transposed into Romanian law before releasing the credits. However, the law voted in Bucharest arouses criticism. “We believe it offers a low level of protection compared to pre-existing legislation”says Laura Stefan, an anti-corruption expert at the Expert Forum think tank in Bucharest.

The question will eventually catch up with the majority of European countries, because the complexity of the commitments will crescendo. “The most difficult “targets and milestones” are scheduled for the years 2025 and 2026”, at the end of the recovery plan, observes David Bokhorst, associate researcher at the European University Institute in Florence. For example, Portugal has planned to enroll around 800,000 people in a digital education program by the third quarter of 2025. “It’s 8% of the total population of the country, notes Mr. Bokhorst. How to ensure that as many people take these courses? And what will be the quality of these programs? »

Beyond budgetary considerations alone, this situation raises questions as to the purpose of European credits. What will remain in 2026? It is more on its great economic and environmental ambitions that the recovery plan will be judged, more than on the precise respect of its 5,000 targets and milestones.