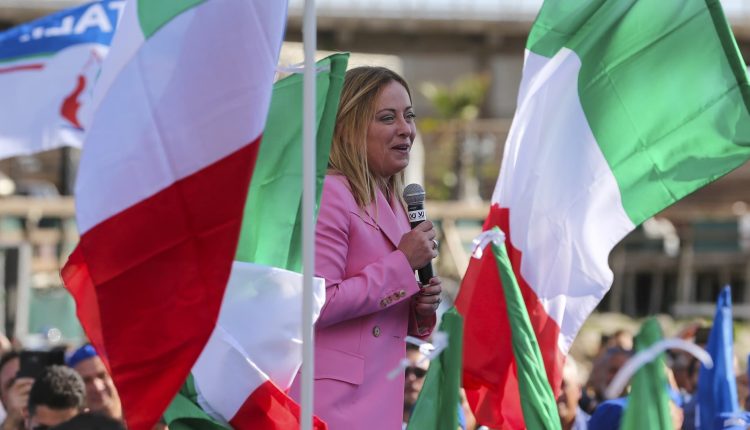 The political leader of the Brothers Of Italy, Giorgia Meloni.

Italians are on course to elect the country’s first female prime minister and the first government led by the far-right since the end of World War II.

Giorgia Meloni’s Fratelli d’Italia (Brothers of Italy) party are set to gain 22.5% to 26.5% of the vote, according to an exit poll late Sunday night. The party is in a broad right-wing coalition with Lega, under Matteo Salvini, Silvio Berlusconi’s Forza Italia and a more minor coalition partner, Noi Moderati.

The alliance is set to win 41% to 45% of the vote, according to exit polls, enough to gain a parliamentary majority, with the center-left bloc on 22.5% to 26.5%. Early projections from the actual results are due Monday morning.

Reaching political consensus and cementing a coalition could take weeks and a new government may only come to power in October.

Meloni’s Brothers of Italy party was created in 2012, but has its roots in Italy’s 20th century neo-fascist movement that emerged after the death of fascist leader Benito Mussolini in 1945. A 2019 speech from Meloni helped her become a household name when an unsuspecting DJ remixed her words (“I am Giorgia, I am a woman, I am a mother, I am Italian, I am Christian”) into a dance music track, which went viral.

After winning 4% of the vote in 2018′s election, Brothers of Italy and Meloni used their position in opposition to springboard into the mainstream. Meloni has taken great measures to appeal to a more moderate center-right majority in Italian society and claims to have rid her party of fascist elements.

Incumbent Mario Draghi, a much-loved technocrat who was forced out by political infighting in July, is still in power in a caretaker role. The snap elections on Sunday in the EU’s third-largest economy come six months before they were due.

The election is being closely watched in Brussels as the European region deals with the war in Ukraine, an energy crisis and rocketing inflation. Brothers of Italy has reversed its opposition to the euro, but champions reform of the EU in order to make it less bureaucratic and less influential on domestic policy.

On an economic level, it has deferred to the center-right coalition’s position that the next government should cut sales taxes on certain goods to alleviate the cost-of-living crisis, and has said Italy should renegotiate its Covid-19 recovery funds with the EU.

The party has been pro-NATO and pro-Ukraine and supports sanctions against Russia.

This is a breaking news story, please check back later for more.