World Cup 2022: Morocco after the Spanish penalty debacle in the quarterfinals 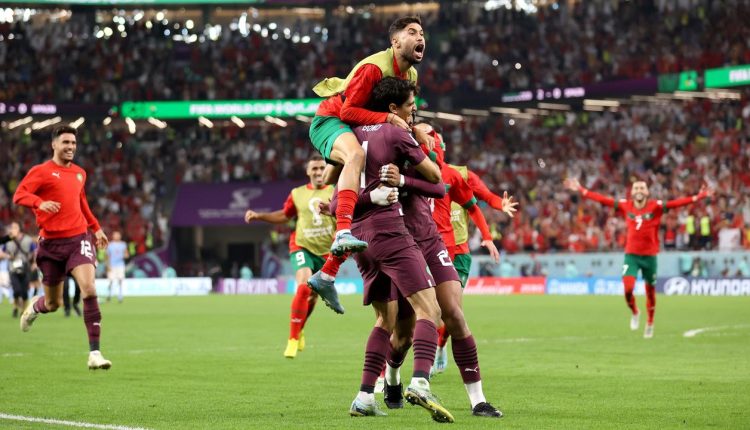 Morocco created a sensation against Spain and reached a quarter-finals at a World Cup for the first time. Goalkeeper Bono became a national hero in a 3-0 penalty shootout. Before that, no goals had been scored in regular time and overtime.

A look at the first 20 minutes of the game showed that the roles were clearly divided, but the superiority of the favored Spaniards is perhaps only superficial. The group opponents of the German team had 70 percent possession of the ball and showed their class on the game equipment with well over 90 percent pass rate.

But Morocco had much more to oppose than passionate combat. When the North Africans came forward, they did so with much more determination than their opponents. At that point, 55 percent of the duels went to Morocco, the outsiders played extremely intensively, but by no means unfairly. And he had the only shot on goal. Achraf Hakimi shot a free kick from 20 meters just over the goal (12th).

What made the Moroccans so strong: In the person of Sofyan Amrabat, they had the center well under control, the six cleared almost everything that came his way. Added to this was the ball security of Hakimi, Hakim Ziyech and Sofiane Boufal. Goalkeeper Bono, well known to the Spaniards as the keeper of FC Sevilla, also showed this, but an inaccuracy on his part caused a short-term change in the game.

Although his hair-raising mispass was followed by an offside position, which made a shot at the crossbar null and void (25th), Spain drew self-confidence from this action. Shortly thereafter, Aymeric Laporte played a pinpoint pass over 40 meters to Marcos Asensio, who just missed the Spanish lead with his shot at the side netting (26′).

The passing artists now challenged Morocco more, but the surprise Group F winners showed that the result was no fluke. Coach Walid Regragui’s team managed to free themselves from this brief phase of pressure and had the next dangerous end to the game through Noussair Mazraoui from FC Bayern – but goalkeeper Unai Simon was able to parry the long-range shot (33′).

It got really dangerous ten minutes later. Boufal repeatedly prevailed with a dribble down the left flank and a precise cross to Nayef Aguerd’s head. However, the central defender headed just over it (43′). Shortly afterwards it became dangerous again in the Spanish penalty area, Laporte was able to clear at the last moment in front of Youssef En-Nesyri, who was ready to score (44th).

It made quite an impression how much Morocco was able to keep the Spaniards in check. The favorites only fired one shot on goal in the first half, not so few at a World Cup since 1998. In the second half it only took nine minutes before the second attempt was made, but Bono had no major problems with Dani Olmo’s indirect free-kick (55′).

Otherwise, Morocco continued to manage to keep the game balanced. Spain did have the ball, but in areas that were not a problem for the opposing defence. Accordingly, it was a game in the second half in which highlights were extremely rare. Morocco proved once again that defense is the team’s showpiece. In the group stage, the team conceded only one goal and got two shots on goal on their own goal.

Morocco flat, but with a big heart

However, Spain managed not to allow any more opposing counterattacks. Accordingly, both teams did not actually give the impression of being able to decide the game in regular time. Whereby in Morocco obviously the strength decreased. Unsurprisingly, however, because the team had to run behind for more than 75 minutes after two thirds of the second half – Spain had well over 70 percent possession.

The outsider’s players struggled through the game, they were repeatedly plagued by cramps, there were muscular injuries, after 84 minutes Morocco had exhausted all five substitution opportunities. But with the support of the frenetic fans who made the game a home game for the team, they withstood the Spanish pressure, kept their foot on the ball and kept the game away from their own goal.

Up to the fifth minute of stoppage time. Olmo then crossed the ball into the penalty area with a free kick – and because no one touched the cross, it ended up being the Spaniards’ most dangerous shot. Bono saved with a reflex and put Morocco into overtime.

There Morocco managed – despite all dwindling forces – to keep the bulwark tight. And then Walid Cheddira had a huge opportunity to open the scoring. However, he shot too imprecisely from eight meters and thus gave Simon the opportunity to deflect the shot (104th).

After that almost nothing happened. It only got really dramatic in the last minute of extra time. Pablo Sarabia had the win for Spain on his feet from close range in the 123rd minute but hit the post. And so it went into the second penalty shoot-out of the tournament after Croatia’s victory over Japan on Monday (December 5, 2022).

No Spaniard scores on penalties – Bono saves like a hero

And it wasn’t the 30-year-old’s last hit against the post. When the score was 1-0, Sarabia hit the wood again and was the first player to miss. Ziyech then scored and then Bono brought the Moroccans very close to the quarter-finals, saving Carlos Soler’s attempt. Badr Banoun also lost his nerve afterwards, but Bono struck again and saved against Sergio Busquets. Hakimi then converted incredibly cool with a chip and shot Morocco into a World Cup quarter-finals for the first time.

The full length of the World Cup round of 16 between Morocco and Spain including extra time and penalties. Florian Nass comments.