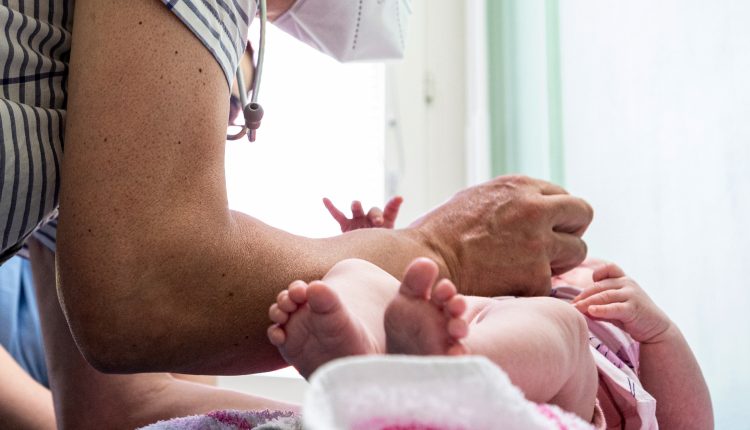 Around 150 sniffling and coughing children a day – the state of emergency is almost everyday life for many pediatric practices. The number of patients is increasing, but the budget is not. How can that be?

“Unfortunately, we cannot offer you an appointment” – this sentence is repeated several times a day in the pediatric practice of Claudius and Kathrin Ries in Bad Kreuznach, Rhineland-Palatinate. Two phones at reception ring non-stop. The doctor’s assistant has the thankless task of putting parents off. “It’s extremely difficult for us,” says the pediatrician. “But we have no other choice, all hell is breaking loose here.”

The two doctors had 15,000 patient contacts in the past year, the catchment area of ​​the practice is large. This week they have treated around 150 sniffling, coughing and feverish children – every day. Influenza, RS virus, glandular fever, the wave of infections is rolling – and not just since this winter.

“Many children with respiratory infections”: pediatrician Claudius Ries in his practice in Bad Kreuznach.

“Also in spring and summer we treated more children with respiratory infections than ever before,” reports Ries. In addition, there are more and more patients suffering from the late effects of the pandemic. Working ten or more hours a day is everyday life for Ries and his wife. But most of the extra work that the two have been doing for months cannot be settled. Because the financial budget of your pediatric practice is set in advance by the Association of Statutory Health Insurance Physicians – and capped.

That means: If they treat more patients in one quarter than in the previous year, they don’t get more money for it. For pediatrician Ries, this means in concrete terms: “From December 4th we will be working practically for free.”

Many of his colleagues in Germany feel the same way as the Bad Kreuznach pediatrician. In Berlin, for example, numerous pediatric practices had already closed for a day in October in protest against the so-called case-based budgeting. “What other industry can do that?” asks Jakob Maske. The federal spokesman for the professional association of paediatricians demands: “There must finally be an end to the nonsensical budgeting, because medicine does not work according to planned economy criteria.”

He speaks of a “debacle in practices” for which politics alone is responsible. Mask criticizes that it has been bleeding pediatrics financially for years and is burdening paediatricians with more and more tasks.

In addition to infections, which increased after the corona pandemic, there were also new clinical pictures: psychological abnormalities, socially conditioned developmental disorders, obesity or eating disorders. These patients need much more time, which is also confirmed by the pediatrician Ries from Bad Kreuznach. But: “We don’t really have that time.”

“There is no ideal accounting system”

Wolfgang Greiner is Professor of Health Economics and Health Management at the University of Bielefeld. He also sees the disadvantages of the system of flat rate budgeting, but says: “There is no ideal accounting system.”

If panel doctors, like colleagues working in private medicine, could bill each service individually, this would lead to significantly more diagnostics and thus significantly higher costs. “Then the health system will explode,” Greiner fears.

He advocates making the flat-rate billing system more flexible. This means enabling doctors to receive supplements in exceptional years such as during the corona pandemic and to be able to bill for the extra work.

However, no fundamental change in budgeting is planned by politicians. The Federal Ministry of Health shares on request tagesschau.de with: “In the coalition agreement, it was agreed to ensure care in underserved regions together with the associations of statutory health insurance physicians and to abolish the budgeting of medical fees in the general practitioner area. Accordingly, budgeting in overserved regions can continue to exist in principle.”

The professional association of paediatricians is dealing with another problem: In the next five years, about a third of paediatricians will retire. “Parents will then have even more problems finding a doctor to look after their children,” says Maske. Because even today, pediatricians are unable to find successors due to the working conditions. The professional association is calling on politicians to abolish the case-based flat-rates, improve the general conditions for resident doctors and provide more places to study medicine.

From the point of view of the health economist Greiner, however, more medical study places will not solve the acute problem of the shortage of paediatricians. He thinks that the subject of paediatrics should be actively promoted among students. In the field of general medicine, such an image campaign has had an effect in recent years, and more young doctors have been recruited for this specialty.

Pediatrician Claudius Ries decided to work with children and families out of full conviction. “It’s the greatest job in the world,” he still thinks. Nevertheless, he and his wife are also certain: if the conditions for resident pediatricians don’t change fundamentally in the next five years, they will give up their practice, because: “We can’t go on working like this forever.”