US and South Korea on North Korea: Deterrence and an Offer 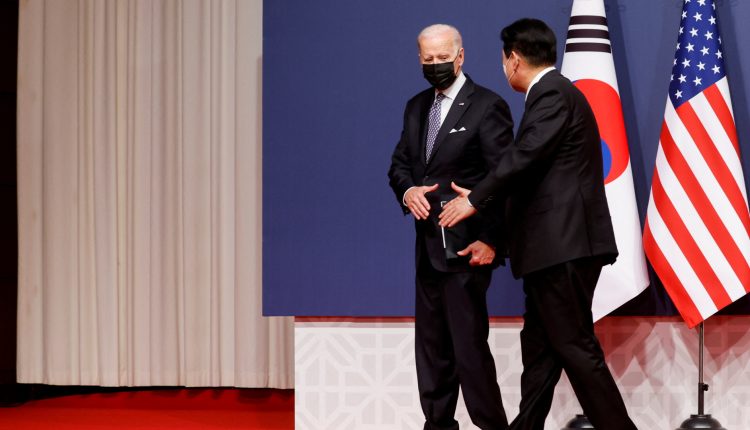 The USA and South Korea rely on stronger deterrence against North Korea. At a meeting in Seoul, Presidents Biden and Yoon also offered the country help.

In view of the threat posed by North Korean nuclear weapons, the USA and South Korea are considering joint and larger military exercises as a deterrent. This was announced by US President Joe Biden and the newly elected South Korean President Yoon Suk Yeol in Seoul.

Missile defense could also be expanded. In the event of an acute threat, Yoon had repeatedly spoken of a preventive strike against the north. The common goal of the two countries is to denuclearize North Korea, Yoon said.

At the moment there is little hope of diplomatic efforts with North Korea. Yoon tends to speak louder than his predecessor Moon Jae In, who until the end of his term in office advocated a dialogue with North Korea’s ruler Kim Jong Un – despite repeated setbacks.

Former US President Donald Trump had also expressed his support for Kim and considered abolishing the maneuvers with South Korea. Biden, on the other hand, reiterated his willingness to “take on all threats together”.

Biden did not fundamentally rule out a meeting with the North Korean dictator. That would depend on Kim being “honest” and “serious,” Biden said when asked by a journalist if Biden was willing to meet Kim with no preconditions.

North Korea understands the joint maneuvers by the US and South Korea as preparations for an invasion, but the two countries emphasize that it is only a matter of defense against Pyongyang. Kim’s government remains committed to nuclear weapons and the development of new missiles.

In addition to more deterrence, the USA and South Korea are also leaving the door open for dialogue with the North – and are also offering help in containing the corona virus. As one of the last countries in the world, North Korea, which is largely isolated internationally, officially confirmed last week that there was a corona outbreak.

Biden has repeatedly offered to supply vaccines to North Korea. “We offered vaccine, not only to North Korea, but also to China,” Biden said. “We are ready to do that immediately. We have not received a reply.”

Tomorrow, among other things, Biden will visit the US troops stationed in South Korea before continuing to Japan. Among other things, a meeting of the so-called Quad Group is planned there – a security alliance between Japan, the USA, India and Australia.

Military deterrence and assistance – US President Biden on North Korea