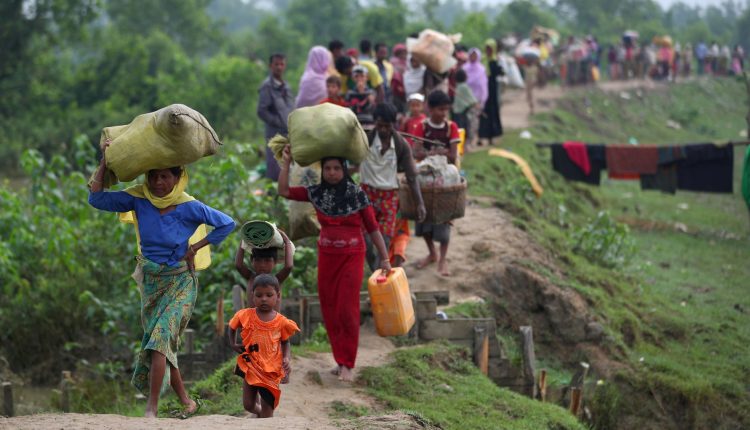 More than a million refugees, destroyed infrastructure and death sentences against members of the opposition and protesters. Myanmar is increasingly descending into chaos and violence. But according to the UN, the military leadership is not ready for any dialogue.

Almost two years after the military coup, the humanitarian situation in Myanmar continues to deteriorate. There are now more than 1.4 million internally displaced persons there, according to the UN Office for the Coordination of Humanitarian Affairs (OCHA) in Geneva. Most of them were driven out after the February 1, 2021 coup. In addition, there are more than 49,400 people who have fled to neighboring countries.

In particular, OCHA lamented the consequences of armed struggles on civilians, as well as access restrictions and threats against aid workers. In addition, civilian infrastructure was destroyed, including tens of thousands of houses, monasteries, churches and schools.

With the coup, Myanmar has descended into chaos and violence. The military junta is taking increasingly brutal action against members of the opposition and protesters. Among other things, it imposes death sentences in secret trials before military courts. Just a few days ago, seven students who took part in protests against the military regime were sentenced to death in the former capital of Yangon.

The verdicts were handed down on Wednesday by a military court behind closed doors, said UN human rights commissioner Volker Türk – according to the human rights organization “Altsean-Burma” they are to be carried out next Wednesday. The group called for an immediate stop. “This has to end immediately,” it said on Twitter.

According to media reports, the students from Yangon were arrested in April. They were accused of being involved in a shooting at a bank. “Putting the students to death is an act of vengeance by the military,” said the student union at Yangon’s Dagon University.

No readiness for political dialogue

The UN is also investigating reports that at least four other people have been sentenced to death. Türk accused the junta of violating “the basic principles of a fair trial” with the trials before the military courts. Hearings sometimes last only a few minutes and detainees are often denied access to lawyers or their families.

Türk also criticized the junta for using the death sentences as a “political tool to suppress the opposition” and called for all executions to be suspended and for a return to a moratorium on the death penalty. However, the military leadership still shows no willingness to end the violence in the country “and to create the conditions for a political dialogue”.

At least 139 people have been sentenced to death since February last year. In July, Myanmar’s military regime carried out death sentences and executed four dissidents for the first time in decades. Among them are democracy activist Kyaw Min Yu and former MP Phyo Zeya Thaw. The junta had accused them of terrorism and conspiracy with opposition militias. The executions sparked outrage around the world.

According to local groups, nearly 2,300 people have been killed in protests and clashes with the military. Thousands of government opponents were arrested. More than 11,000 of them are said to remain in detention. Many opponents of the regime, especially young people, joined the armed resistance. As the “People’s Defense Forces” they fight across the country, sometimes independently, sometimes jointly, sometimes with long-established rebel organizations against troops of the military junta.