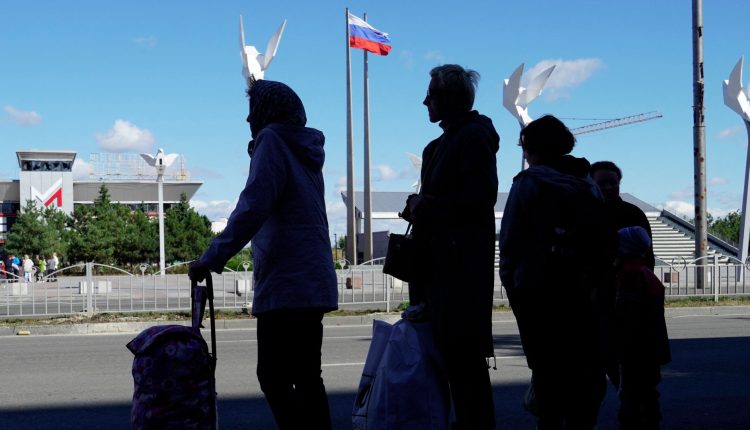 Human rights organizations repeatedly report kidnappings from Ukraine to Russia. The organization “Helping to Leave” records thousands of such fates – and suspects a high number of unreported cases. The annexations are likely to exacerbate the situation.

It is a five-digit number of kidnappings from Ukraine that can be found in the documents of the aid organization “Helping to Leave”. The organization has registered 13,547 cases since mid-March. But the number of unreported cases is likely to be many times higher, suspects Bogdana Jakowenko.

These cases end up with her and her colleagues, behind which there are often no individual fates, but groups of people who report that they were brought to Russia against their will. Yakovenko and her team estimate the number of those abducted to be almost two million.

Not everyone can ask for help

In Jakowenko’s department alone, 40 employees are now taking care of these fates, she reports in an interview with tagesschau.de. Yakovenko knows that not all abductees can report to “Helping to Leave,” some are being held in custody, while others are able to leave Russia without help.

The human rights organization Human Rights Watch also follows such cases, reports Belkis Wille tagesschau.de. However, there are no concrete figures on the kidnappings. Russia has announced that there are over three million Ukrainians in the country. However, it is not known how many of them were deported there.

Volunteers from the aid organization “Helping to Leave” at a working meeting. Also present: one of the two heads of the kidnapping department, Bogdana Yakovenko, back row, second from left.

Not a question of free will

Yakovenko from “Helping to Leave” does not believe that many people from Ukraine went to Russia voluntarily. Some acted out of sheer necessity because they just wanted to get away after weeks of seeking shelter in cellars – but that has nothing to do with free will.

In addition, there is another indication of the mass abduction: a clearly recognizable system. Both Jakowenko and Wille report the same processes that those affected told them about. People from Russian-occupied areas are taken to camps – often in the Donetsk and Luhansk regions, which Russia has since annexed after sham referendums.

This is where what many organizations call a “filtration process” begins. This includes surveys on political attitudes as well as registering people. Fingerprints would be taken, battle marks looked for, and photos taken.

In addition, people’s smartphones would be searched – some of them forced to delete photos and videos. Anyone suspected of “causing problems” in the future and clinging to pro-Ukrainian views will be given strict conditions or arrested. Then they continue to the Russian heartland under duress in buses or trains.

In addition, people in Russia are always taken to the same places – for example, to Rostov, Taganrog, Belgorod, but also to the regions around Moscow and St. Petersburg. And: One observes the mass arrival of people who arrive in Russia and want to leave immediately, says Yakovenko.

And then there are the cases of Ukrainian children who are snatched from their parents and taken to Russia for adoption, Yakovenko says. These children are also not included in the number available to the organization.

How does Helping to Leave work?

“Helping to Leave” is an aid organization that is mainly financed by donations. Although the organization is registered in the Czech Republic, it is organized in a decentralized manner. Employees work from different countries – others help on site. According to the organization, more than 200 volunteers now support the organization in helping people from Ukraine and Russia to flee. The organization provides people with verified information on escape routes and organizes and finances buses and flights or legal assistance. People can contact the organization through a chat bot on Telegram.

propaganda as a motive

Yakovenko sees several motives behind the kidnappings: It’s about domination and control, but also about creating a narrative – one that shows Russia as a liberating, helping nation. For example, people from Ukraine would have received money to appear as rescued people in Russian propaganda videos. The same applies to children who get sweets – to be filmed doing so.

The work of their organization, Yakovenko expects, is likely to become even more difficult in the coming period. After the recent annexations of Ukrainian territories by Russia, she fears that even more Ukrainian men than before will be sent to the front lines to fight for Russia. For the organization “Helping to Leave” this means: more people who want to flee.