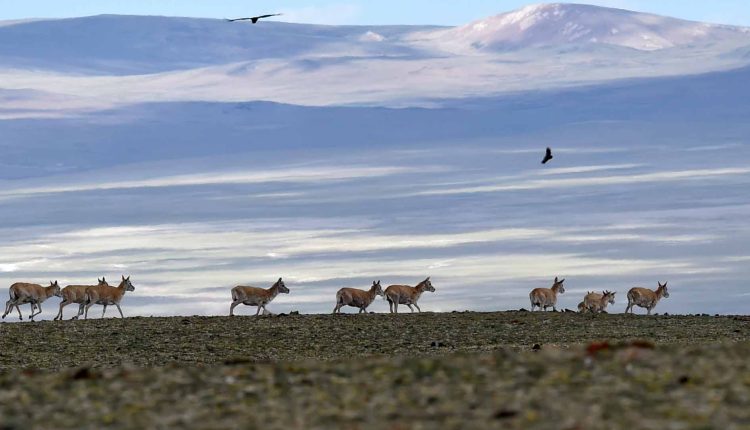 The wool of the Tibetan antelope is considered to be the finest in the world. Trading in it is strictly forbidden because many animals have to die for the production. In India, scarves are still sold under the counter – are they also coming to Germany?

Skukla clearly remembers the moment she first held Shahtoosh between her hands many years ago. “It’s so light you don’t even realize you’re wearing it,” says the elderly lady from New Delhi. It is precisely this fascination that makes shahtoosh, also known as king’s wool in this country, a status symbol worldwide.

But the production is a brutal, bloody business. Four to five Tibetan antelopes have to die for a single scarf. The animals have been on the Washington Convention on International Trade in Endangered Species since 1979 and their trade is strictly prohibited.

According to the WWF, 90 percent of all Tibetan antelopes disappeared in the last century. Their population has now recovered slightly, which experts attribute to the strict protection. Nevertheless, according to research by the ARD Studios South Asia offered under the counter even in India’s capital.

For a long time, the Tibetan antelope could not graze as peacefully as here: only when they were placed under strict protective measures did the population recover.

There are severe penalties

Kuwaitis, Italians and Americans in particular regularly ask for shahtoosh, says salesman Mohammed Iqbal Khan. According to his own statements, the 53-year-old only sells legal goods.

If it was found out that he was selling shahtoosh scarves, he would face a severe penalty. The police would put him in prison for five to six years – without even questioning him, he says.

Nevertheless, many traders take the risk. Shahtoosh is worth a lot on the black market, says Inspector A. Pragateesh of India’s Wildlife Crime Agency. He’s sort of the number one shahtoosh investigator in India.

The demand from the fashion industry around the world is great. So there is a need somewhere, there are animals somewhere else and then weaving is done somewhere else, says Pragateesh and speaks of a “unique and interesting trade”.

The raw wool of the dead animals is smuggled from China to India and then made in the Kashmir region by traditional weavers for customers around the world.

Investigators are still finding such scarves made from the wool of the Tibetan antelope – anyone who owns or sells them must expect draconian penalties.

That’s why Pragateesh sends fake customers into stores or spends hours sifting through social media under the name “Operation Soft Gold”. The pandemic has shifted business online. Especially on Instagram, users would brag about the forbidden textiles.

His job is to follow the digital tracks and identify the places where the scarves are traded. A whole network of informants also tells his authority which airports the smugglers used to bring the wool out of the country.

His efforts seem to be paying off. Hundreds of Shahtoosh products have been withdrawn from circulation in the past four years, and he himself has traveled across the country to train customs officials.

When asked, German customs also reported that recognizing shahtoosh scarves was a regular part of training events. According to the Federal Agency for Nature Conservation, however, no confiscations have been recorded in Germany since 1996 on imports from third countries.

The animal protection organization PETA has its doubts. Johanna Fuoß, specialist for clothing and textiles, refers to the success rates in Switzerland. There, the trade ban to protect the Tibetan antelope is controlled much better than in Germany.

According to Fuoss, German citizens are also repeatedly caught with the illegal wool products. This suggests that Shahtoosh also passed German borders:

The fact that no report on the confiscation of shahtoosh products has been published in Germany for many years shows that the protection of antelopes is not given sufficient priority by German customs.

German customs say that no products made from the wool of the Tibetan antelope have been found in years. Animal rights activists are skeptical.

PETA suspects that the reason for the lack of controls at many customs offices is that the implementation of the import ban would be too expensive and too time-consuming. Customs officials would have to be well trained to be able to distinguish shahtoosh from comparable fibers like cashmere with the naked eye, says Fuoss.

To really be sure that it is Shahtoosh, a look under the microscope and a subsequent hair analysis in the laboratory is necessary.

A claim of the Shahtoosh traders: only small Tibetan antelopes are sheared. But the animals would hardly survive in their settlement areas.

Many confiscations in Switzerland

In Switzerland, the shahtoosh business has apparently exploded in recent years. Above all, the posh Swiss resort of St. Moritz seems to have become a hub for the forbidden luxury goods.

According to Swiss customs, 79 scarves were confiscated in 2019 alone, for which up to 400 animals had to die. However, this is only the tip of the iceberg.

When Swiss investigators are looking for Shahtoosh products, they often find them in the ski resort of St. Moritz.

By the way, there are still many rumors surrounding the production today. Seller Khan says the animals are no longer killed, only sheared. A shahtoosh scarf is made from the wool of 40 baby antelopes.

Inspector Pragatheesh can only shake his head at statements like this. Since the animals live at an altitude of several thousand meters, they would simply freeze to death miserably. There is simply no way to get the wool without harming the animals.