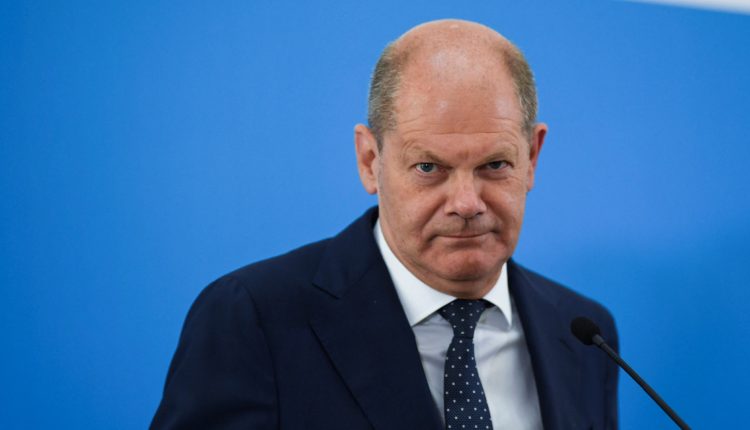 Sometimes flippant, sometimes vague, sometimes stubborn – Chancellor Scholz’s communication irritates not only journalists, but also coalition partners. But only a few from the ranks of the traffic light express clear criticism.

It was an irritating moment: the meeting of the G7 countries in Elmau had just ended. In the final press conference, Rosalia Romaniec, a journalist from Deutsche Welle, asked whether Olaf Scholz could specify what security guarantees the G7 states would give Ukraine. Then Scholz answered flippantly: “Yes, I could.” After a pause, he added with a grin, “That’s it.” “Too bad,” Romaniec wrote on Twitter. Your question was meant seriously.

Scholz seemed cocky at that moment. Almost as if he had lost his grip on reality after the success at the G7 summit in the Bavarian Alps. It has not yet been decided whether the words in the final document, which express the unity of the seven states, can be implemented in real politics.

Not happy for the first time too soon?

The Chancellor should actually know that he shouldn’t celebrate too soon. At the beginning of his chancellorship he had traveled to Moscow. Russian President Vladimir Putin had just stationed 150,000 troops on the border with Ukraine. The question was whether a Russian attack on Ukraine was imminent.

From the Chancellor’s point of view, the four-hour conversation with the Russian President apparently went so well that Scholz gave an almost exuberant impression on the return flight. This is what journalists who had accompanied him reported. A deceptive joy, as it turned out shortly afterwards.

Apparently there are situations in which Olaf Scholz is very, very sure of himself. Sometimes maybe too sure. “I think he’s extremely stubborn,” says Marie-Agnes Strack-Zimmermann. The chairwoman of the defense committee praised the chancellor for his “turning point” speech after the outbreak of war against Ukraine at the end of February: “My heart broke for him and I felt confirmed that it was the right thing to have elected him chancellor .”

But the FDP woman, who is celebrated as a star in her party, is not satisfied with a good chancellor’s speech: “It was sobering, however, that there was a lot of quiet for weeks afterwards.” Strack-Zimmermann drove the chancellor in front of him, demanded the delivery of heavy weapons to the Ukraine and called him im Deutschlandfunk a “procrastinator”. Her interim conclusion: “Great speeches are important, but in politics we are ultimately measured by our actions.”

Hardly any public criticism from the Greens

The Greens are largely reluctant to publicly criticize Scholz. Toni Hofreiter, chairman of the Europe Committee, is considered an exception. The Greens faction in the Bundestag in particular has to swallow toads again and again: If, for example, the First Parliamentary Secretary Irene Mihalic had had his way, Scholz’s special assets of 100 billion euros would not have been invested exclusively in the Bundeswehr, but part of it in civil protection .

However, Mihalic does not want to blame the chancellor for the fact that the Greens were not able to enforce this demand. He was “focused on the matter and reliable in agreements,” said the Greens politician. “This is essential in any coalition, even more so in a three-way alliance like the traffic light.” The message: just don’t take internal coalition disputes to the outside world. “I think Scholz is doing well so far and is a very committed partner.”

Disappointment also in their own ranks

The chancellor not only has to win over his coalition partners, the Greens and the FDP, but also his own party. The turning point is likely to be painful, especially for the left-wing SPD camp. For example, Juso chairwoman Jessica Rosenthal made no secret of the fact that she did not want to support the billions invested in the military.

Many, like parliamentary leader Rolf Mützenich, tried to hide their disappointment. The danger that prominent social democrats will verbally tear each other apart in public, as happened in the past, seems to have been averted at the moment. The SPD has apparently recognized the seriousness of the situation: the corona pandemic is still raging, and there is a risk of a climate catastrophe. In addition, there are concerns about rising energy costs, a recession and even mass unemployment.

“You certainly have to concede to the chancellor: Rarely has a coalition been confronted with such far-reaching and major challenges shortly after it was launched,” agrees Thorsten Frei, first parliamentary manager of the Union faction.

Union faction vice Frei wants the Chancellor to use clear and unambiguous language.

But it is precisely in times like these that a head of government must communicate clearly. So far, Scholz has said “only a few words about inflation”. The CDU politician demands that he “finally understand it as a key challenge for his chancellorship and take tough action against its causes.” Otherwise there will be massive social upheaval.

“As far as his ‘gift’ for communicating is concerned, I am of the opinion, with all due respect, that he could be even more precise and clear,” agrees Strack-Zimmermann. “People in Germany must be taken along – in clear and unambiguous language.”

So far, it seems, Scholz hasn’t always found the right tone. Either he remains too vague for his critics. For example, he refuses to say that Ukraine should win the war – leaving a lot of room for speculation about his foreign policy goals.

Or he overshoots the target – for example during a panel discussion at the Catholic Day at the end of May. When he was interrupted by climate activists, he said mockingly that the black-clad staging reminded him of a time that, thank God, was long ago. Did Scholz actually compare his critics to Nazis from the Nazi era, as climate activists fear? Another irritation that actually could have been avoided.

Olaf Scholz is a guest in the ARD summer interview on Sunday. You can see the interview from 12 p.m. on tagesschau24 and in the live stream on tagesschau.de – from 6 p.m. on the first.