Thailand’s orchid growers are in crisis due to Corona 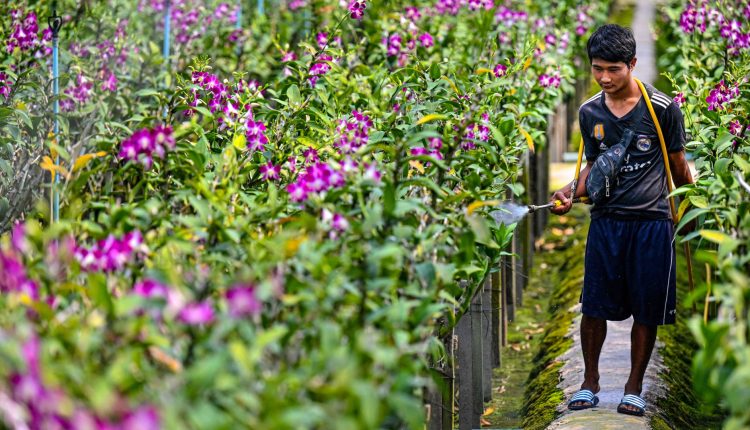 Thailand is the world’s largest orchid exporter. But during the pandemic, demand collapsed. Now China’s zero-Covid policy is ensuring that some flowers arrive withered – and the industry is facing disaster.

Somchai Lerdrungwitayachai examines his orchids almost lovingly. He has millions of them because he owns a 20-hectare orchid farm in western Bangkok. His specialty are orchids of the species Dendrobium Sonia with their typical white-pink leaves.

The land of orchids

The flowers have a long tradition in the country, which also describes itself as the “land of orchids”. The filigree plants stand for hospitality in Thailand. Around a hundred years ago, orchids were cultivated here as a pure luxury hobby. But benefited by the ideal climate, Thailand quickly developed into the world market leader in orchid cultivation and export and has not relinquished the title since the late 1970s.

Trading in orchids was a lucrative business worth millions – until the corona pandemic came and demand suddenly collapsed.

Orchids are considered luxury flowers – demand plummeted during the pandemic.

Luxury flowers not in demand during the pandemic

Hardly any other flower represents luxury more than orchids. They are ordered en masse for weddings, and hotels decorate their entrance halls with them – especially in the main customer countries of China, Vietnam, Japan and the USA.

When the orders suddenly failed to materialize, Thai orchid growers fell into a crisis from which they have not recovered to this day. One in five orchid farms had to close and Somchai also paid the salaries of its around 50 employees from reserves to keep its orchid cultivation afloat.

As in many other industries, China’s handling of the corona virus is troubling orchid growers the most. Before the pandemic, Thailand exported around 270 million orchids a year to China, but now it is only 170 million.

This is also problematic for Somchai. He used to deliver around 80 percent of his orchids directly to the Chinese transport hub in Kunming with his own van – not without preparing them perfectly for transport before their journey: the cut flowers are trimmed and put in a bag with a vitamin-rich nutrient solution so that they last as long as possible. However, while transport by land previously took three to four days, it now takes at least ten to 14 days.

The country’s strict no-Covid policy leads to more extensive controls. Sometimes a delivery is slowed down completely by a lockdown. This is of course a big problem in the flower business: the flowers are often already withered before they reach their destination.

The big flower exporters in Bangkok are also feeling that business isn’t going as well as it used to. Wuthichai Pipatmanomai is Vice President of the Thai Orchid Exporter Association and co-owner of a large flower trade. He only delivers 1.2 million instead of 3.6 million orchids a month and has already had to lay off half of his workforce.

So far he has been waiting in vain for financial support from the government. “We have big problems,” he says. Because not only the pandemic, but also the war in Ukraine has a direct impact on his flower trade. Rising prices for petrol, fertilizer and pesticides have forced Wuthichai to sell his orchids 20 percent more expensive – much to the dismay of his business partners, especially in Europe, who now prefer to focus on native flowers. Like everyone else, Wuthichai is hoping for a quick improvement in the situation. He fears: “We don’t have much time left.”