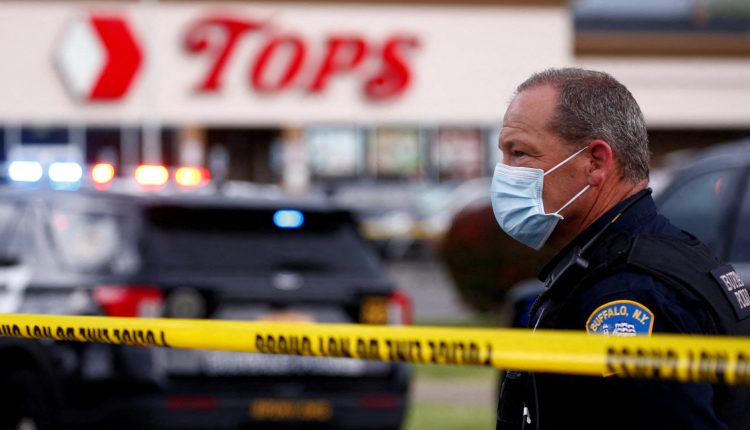 At least ten people have been killed in a shooting at a supermarket in Buffalo, New York. Police are investigating a hate crime.

After the gun attack that killed ten in Buffalo, New York, the FBI is investigating suspected racist motives. “We are investigating both a hate crime case and a violent racially motivated extremism case,” Buffalo FBI investigator Stephen Belongia said at a news conference.

An armed attacker opened fire in a grocery store, killing at least ten people. Three others were injured, police said. The man was taken into custody immediately after the crime, Mayor Byron Brown said. “What began as a beautiful day in the city of Buffalo has turned into a terrible day. A day that breaks the heart of every member of our community,” Brown said.

The attacker stormed into the Tops Friendly Market in a mostly black neighborhood in Buffalo and apparently streamed the attack live on the Internet, investigators said.

The video shows how he got out with the gun on the passenger seat in front of the supermarket and opened fire in the parking lot. He shot other victims inside the store. The investigator said they are investigating whether he also posted some kind of manifesto on the Internet.

According to the authorities, there is “certain evidence” that points to a racist act. The majority of the victims were black. According to initial findings, the shooter acted alone.

Perpetrators not from the community

The supermarket is located several miles north of downtown Buffalo in an area primarily populated by black people. “Why does a white man come here and shoot in a black supermarket,” a local resident said on local television. A police officer described the crime scene in The Buffalo News newspaper: “It’s like stepping into a horror movie, but it’s all real.”

The 18-year-old perpetrator was not from the community, the mayor said. “The shooter traveled hours from outside of this community to commit this crime against the people of Buffalo.” The crime happened in and in front of a supermarket. It was a day when people enjoyed the sunshine and all kinds of happy activities.

New York State Governor Kathy Hochul wrote on Twitter that she was closely monitoring the situation after the incident at a local grocery store. “If you are in Buffalo, please avoid the area and follow directions from law enforcement and local authorities.”

US President Joe Biden expressed his condolences. The act was “terrible,” it said from the White House. “The President and First Lady are praying for the victims and their families.” The White House said Biden had been briefed on the incident by his homeland security adviser and will continue to be kept informed.

In March 2021, there was an attack at a supermarket in Boulder, Colorado, which also killed ten people. Investigators in this case have not yet released any information about the possible motive.