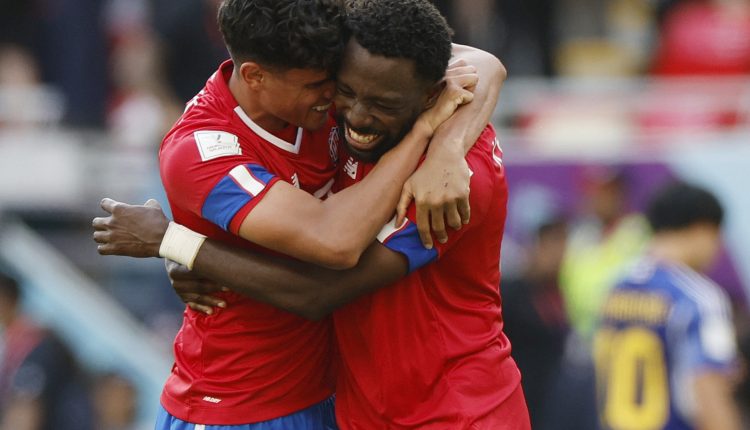 With a surprising 1-0 (0-0) win against Japan, Costa Rica’s footballers increased Germany’s chances of reaching the knockout stages of the World Cup. The DFB team cannot be eliminated against Spain tonight, even if they lose.

However, winning a point would significantly improve the starting position. Alongside Japan and Spain, the Central Americans also picked up three points in Group E. Japan still has to play Spain at the end on Thursday (December 1, 2022 / 8 p.m. CET). Costa Rica meets Germany in the parallel game. “Hopefully my team can show what they’re capable of,” said coach Luis Fernando Suarez. “No one can forget us, we’re still here.”

The winning goal for his Costa Ricans on Sunday (November 27th, 2022) in the Ahmed bin Ali Stadium in Al-Rayyan by Keysher Fuller came in the final stages out of nowhere (81st). Japan were superior but were punished for being far too passive in the first half. Despite losing 7-0 to Spain at the start – the heaviest defeat in their World Cup history – Los Ticos still have chances of progressing themselves.

After the final whistle, Fuller fell to his knees and raised his arms in prayer, while his teammates embraced each other and celebrated their sporting resurrection. “I’m overjoyed to have scored the goal. We’re still alive,” Fuller said. “We have complete faith in God and in ourselves.” The Japanese crept into the stadium catacombs with stony faces. “We didn’t have our best game, but we have to look ahead now,” said Ritsu Doan from SC Freiburg on ZDF – even if one of the favorites Spain comes into focus when looking ahead.

Despite the opening win against Germany, he threw the dice Japan coach Hajime Moriyasu messed up his starting eleven. Above all, he relied on Bundesliga power: Doan came on from the start, as did Daichi Kamada (Eintracht Frankfurt), Wataru Endo (VfB Stuttgart), Maya Yoshida (FC Schalke 04) and Ko Itakura (Borussia Mönchengladbach). Takuma Asano from VfL Bochum, winning goal scorer at 2:1 against Germany, had to sit on the bench again. Midfielder Hidemasa Morita also replaced Düsseldorf’s Ao Tanaka and striker Ayase Ueda in the starting line-up. Costa Rica coach Suarez gave Kendall Waston and Gerson Torres the confidence to attempt the 0:7 smack against Spain to iron out

“Grass chess” before the break

Japan started from a solid defense with a five-man chain. Since the Costa Ricans didn’t run headlong either, a controlled and balanced game between the penalty areas developed in the first half. The result of this “lawn chess”: long ball relays, zero chances to score. Most exciting was the yellow card against Anthony Contreras, who came too late against Yoshida and kicked Schalke’s ankle (41′). Costa Rica couldn’t, Japan didn’t want to (yet).

That changed abruptly with the restart. Moriyasu brought in two fresh players in Asano and Hiroki Ito, and Asano in particular immediately put more effort into goal. After Hidemasa Morita fired the first shot on target from 16 meters, which deserved the title (46′), Asano tested Costa Rica goalkeeper Keylor Navas with a header (48′). A free kick from Yuki Soma from 17 meters flew over the goal (63).

The lead for Japan was now in the air. The “Los Ticos” were almost exclusively in defensive mode. Joe Campbell’s foray into the Japanese penalty area, which ended with Endo pulling his shirt but without a penalty (74′), remained the big exception. Until the ice-cold shower for Japan. In one of the few Central American relief attacks, Fuller decided to swing from 16 meters. The ball hit the far corner and the game was turned upside down. Kamada still got the chance to equalize, but failed from close range to Navas (88th). The Paris St. Germain keeper kept his goal clean this time after the disgrace against Spain.